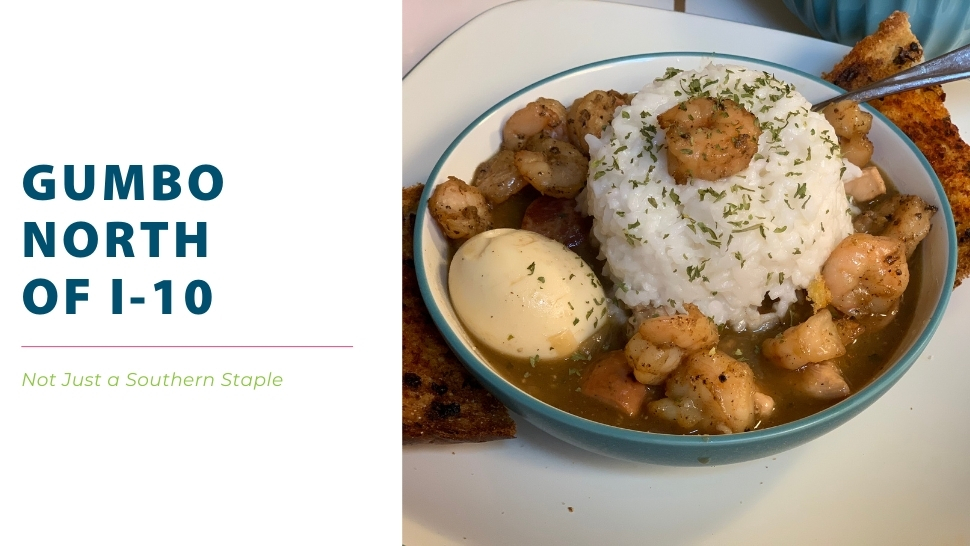 There is a common misconception that central and northern Louisiana don’t participate in the Cajun and Creole traditions associated with south Louisiana. This misconception includes the belief that people from these areas don’t cook iconic foods such as jambalaya, boudin, and gumbo. This is simply not true. You can get a bowl of gumbo in Shreveport just as easily as in Lafayette. But before we dig into gumbo north of I-10, let’s learn a little more about culture in North Louisiana.

This area has also become known as the Crossroads because it’s where the southern and northern parts of Louisiana meet. Many cultures have shaped the area, including French, Spanish, English, African, and Native American. The culture here focuses on quality of life and values and embraces visitors with small-town friendliness.

While Cajun and Creole cuisines (including gumbo) are readily available here, Cenla is most famous for its pies. Lea’s Lunchroom in Lecompte serves fruit pies that have become a Louisiana institution. The city of Natchitoches is world-famous for its meat pies.

Alexandria is the unofficial capital of Cenla. It offers cuisine ranging from down-home to ritzy with flavors taken from Cajun, French, Italian, and Asian cultures.

Both Central and North Louisiana share something else in common with South Louisiana – lots of festivals. You’ll find celebrations of many cultures, music and art. These include the Northeast Louisiana Celtic Festival, Oktoberfest, Red River Revel Arts Festival, Shreveport Blues Festival, just to name a few.

The region’s food festivals illustrate some of the culinary differences between north and south Louisiana. They include the Natchitoches Meat Pie Festival, Louisiana Peach Festival, Taco & Margarita Festival and the Louisiana Chicken Festival.

Diving into the Gumbo of North Louisiana

As mentioned earlier, gumbo is indeed a popular dish in Central and North Louisiana–both in restaurants and with home cooks. It may not be as prevalent as in southern Louisiana, but people in this region do embrace the quintessential Louisiana dish.

The two basic types of gumbo are the same in this region as in south Louisiana–Cajun gumbo and Creole gumbo. The Cajun variety uses a very dark roux, which creates a rich, nutty broth. The “holy trinity,” of onions, bell peppers and celery flavor the dish.

Creole gumbo has a lighter roux. It’s flavored with ham or other smoked meat as well as okra and tomatoes. Commonly added ingredients include shrimp, crab, oysters, and crawfish. Filé powder (ground sassafras leaves) thickens the dish and adds flavor.

Found almost everywhere in the state, chicken and sausage gumbo and seafood gumbo are widely popular options. There are two good reasons why these types of gumbo are so prevalent everywhere in Louisiana.

These two versions are traditional, tried and true, and passed down through generations. Secondly, the ingredients for these gumbos were the most readily available to the people populating Louisiana in the early 1800s.

More innovative versions of gumbo can be found in restaurants throughout Central and North Louisiana. Some interesting examples include smoked ham and black-eyed pea gumbo topped with collard green pesto and roasted duck, black-eye peas and tasso.

There’s really no right or wrong way to make a gumbo. People who live in these regions often experiment with their own recipes just like residents in the south.

The next time you’re craving gumbo, you may want to consider taking a little trip north of I-10. There are hundreds of great restaurants in Central and North Louisiana that offer their own takes on the dish. Of course, trying to create different styles of gumbo in your own kitchen is also a fun way to learn more about this Louisiana classic, too.

Now that you’ve learned a bit about the ways gumbo is made in Central and North Louisiana, we’d love to hear from you about your favorite recipes and thoughts on this iconic dish. Let us know in the comments!

The gumbo in the picture looks different than any gumbo I have had. Is that a hard boiled egg?

Hey Cynthia! It sure is a hard-boiled egg. We wouldn’t be opposed to trying it!

There are so any different ways to eat gumbo out here depending on what part of the stat you’re in!

My family loves gumbo. We make the Cajun type but not a real dark roux. I have tried the Creole and thought it was great but we stick to what we know. As for the eggs my grandmother told me that during the depression eggs were added to soups, gumbo and gravy to “ stretch” the protein. Everybody had chickens so eggs were plentiful but not meat.

There are so many different types to try, and they’re all great and unique in their own way. 🙂 Thanks for sharing your story with us, Dianne!