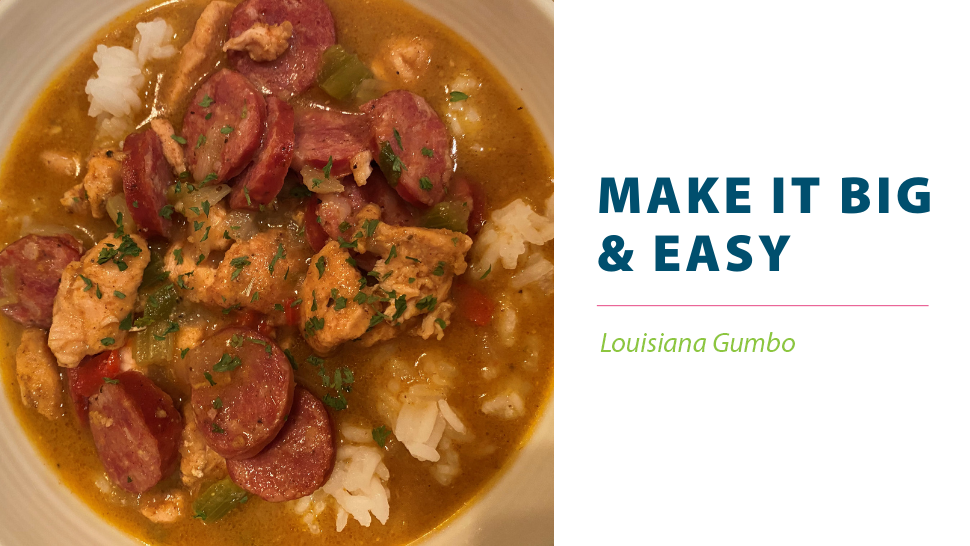 Tourists and the media often associate gumbo with New Orleans, although people in every corner of Louisiana enjoy the dish. There’s a lot to learn about this world-famous dish, popular in restaurants and homes in New Orleans and surrounding areas like Terrebonne Parish.

But first let’s set the table with a few tidbits about this region. New Orleans is one of the most eclectic cultures in the world. African, French, Spanish, German, Creole, Cajun, and Native American influences have blended to create a city in a class of its own.

From its incomparable cuisine to its distinctive architecture, funky art scene, and historic jazz, New Orleans definitely has its own flavor. Top it off with Mardi Gras Indians, second lines, voodoo, and gospel brunches, and it’s clear to see that there’s no place like it anywhere else.

On the other hand, nearby Terrebonne Parish has a more down-home feel, shaped mainly by Cajun and French cultures. This region is known for its countless bayous, teeming swamps, abundant seafood, and food festivals. Towns such as Houma, Chauvin, and Bayou Blue reflect the strong influence of Cajun culture. Terrebonne Parish proudly bills itself as a unique part of “Cajun Country.”

Numerous cultures have shaped New Orleans—perhaps more so than any other city in the U.S. Today, the people of New Orleans comprise a true “melting pot” of different races and every socioeconomic class.

While known for Creole and Cajun food, the city’s cuisine also includes soul food, French, Spanish, Italian, African, and other offerings. This has resulted in a food scene that is absolutely unique and undeniably delicious.

Terrebonne Parish is in some ways a world away from New Orleans, even though it’s close by. Cajun and French culture have largely shaped the region.

There are people of various ethnicities and social classes as with any community in Louisiana. However, this region is known for its hearty Creole and Cajun food, BBQ joints, and down-home plate lunches. That’s not to say that there’s no fine dining in the area! There are certainly plenty of culinary offerings for those with a more refined palate.

In New Orleans, you can probably find just about any type of gumbo known and a few that were previously unknown! To start with, there are two main types of gumbo popular in New Orleans: Creole and Cajun.

Creole gumbo usually starts with a lighter roux (lighter in color and not as strong in flavor) than Cajun gumbo. It’s often flavored with ham, okra and tomatoes (which are rarely found in Cajun gumbo). Most versions of Creole gumbo incorporate seafood like crab, shrimp and oysters rather than red meat or poultry.

Filé powder (ground sassafras leaves) is also often included as a flavoring and thickener. Of course, everyone has their own version of Creole gumbo, but this is the most common recipe. Creole gumbo (and Creole cooking in general) evolved from the many cultural influences in New Orleans that we mentioned earlier.

Cajun gumbo usually starts with a very dark roux to create a richer broth than its Creole counterpart. In addition to the “trinity” of onion, bell pepper, and celery, this gumbo often includes smoked sausage and almost any type of meat, from chicken or other poultry to beef, pork, or wild game.

Seafood versions are also popular and include shrimp, crab, crawfish, and oysters. In addition, many recipes for Cajun gumbo combine both meat and seafood. The variations are practically endless. The fact that early Cajun communities had to use whatever meats and seafood they had at their disposal influenced their gumbo.

Dive Into the Rich and Delicious History of Gumbo

What is gumbo and where exactly did it come from, anyway? Find out more about the history of Louisiana’s most famous and beloved dish.

There’s also a third type of gumbo commonly associated with New Orleans–gumbo z’herbes, also known as “green gumbo.” This is a vegetarian gumbo that many locals eat during lent. It starts with a medium-light roux and includes lots of leafy greens such as mustard, turnip, or collard greens.

When it comes to gumbo in Terrebonne Parish, the Cajun gumbo is the most popular, by far. It’s expected since Terrebonne bills itself as part of Cajun Country. Chicken and sausage is a very popular combination, with seafood gumbo also a big favorite.

Restaurants in the area also serve their own versions, such as chicken and shrimp or smoked duck and andouille sausage. Shrimp and okra is also a tasty combination often served in the region.

You can also find numerous “gourmet” gumbos at restaurants throughout New Orleans and Terrebonne Parish. Some examples include stuffed quail and andouille with oysters; turkey, tasso, and alligator sausage; veal brisket and andouille; rabbit and venison sausage; crawfish and clams with smoked oysters.

It’s All Good—Try it for Yourself

Both New Orleans and Terrebonne Parish offer so many different gumbo creations that it’s impossible to list them all here. Perhaps the best way to learn more is to visit the region and sample some for yourself. Of course, there’s no better way to gain understanding of different cooking styles than to experiment with them on your own. Who knows, you may end up creating a gumbo that’s better than any you’ve ever had before!

We hope you’ve learned something about the ways people enjoy Louisiana gumbo in New Orleans and Terrebonne. What do you think about the gumbo styles listed here? We’d love to hear from you in the comments!