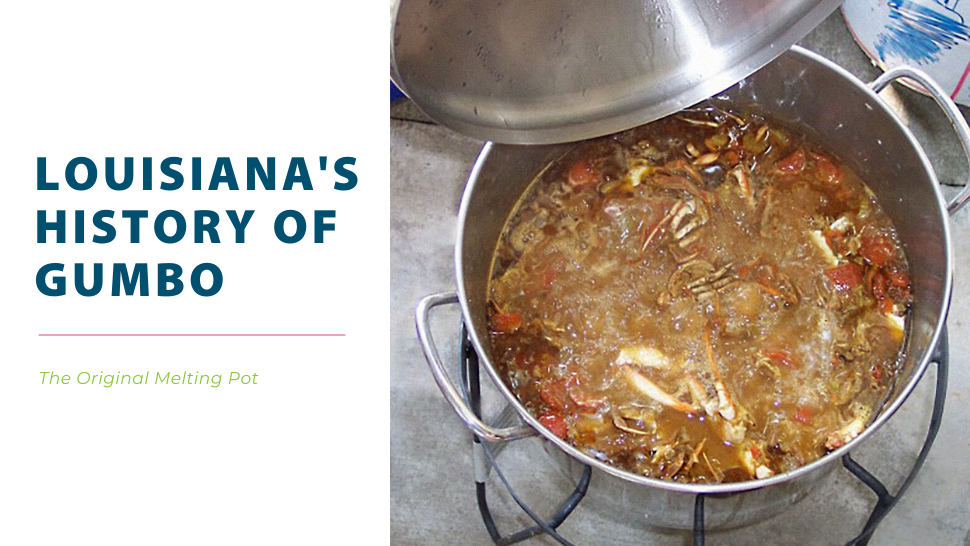 Louisiana is known for savory dishes and flavorful food staples the world over. However, of all the foods found within its boot-shaped borders, gumbo may be the most renowned. It’s the perfect collision of cultures, borrowing flavors from a variety of groups to create something unique and delicious. Plus, the flexibility of its ingredients and preparation meant that almost anyone could afford to make it in those days.

Just like its combination of flavors, the history of gumbo is vibrant. There are very few direct records of the dish’s development. However, historians speculate that it took generations of cooks from all backgrounds to create the dish. Explore its tasty origins with us! Next time you whip up a pot for your family, you’ll be able to appreciate its history in every bite.

The Multicultural Roots of Gumbo

Gumbo metaphorically speaks to the “melting pot” of Louisiana culture, and for good reason! The ingredients in traditional gumbos have ties to cultures across the globe, including African, Spanish, French, and Native American tribes.

The first documentation of gumbo in historical texts begins in 1803. Louisiana was less than a decade away from becoming a state. Residents of the region had been living together and sharing ideas for more than a century. Due to this, historians believe that gumbo was emerging and evolving within home kitchens more than a century before.

Some historians believe the name “gumbo” originated from the West African word for okra, “ki ngombo.” This gives strength to the popular theory that the dish started as an African okra stew. Even today, many forms of gumbo still include okra as a main ingredient, which speaks to its strong African influence.

Others think that gumbo started from the French soup, bouillabaisse, which also uses a roux base. The possibility exists that French and African dishes slowly melded to form the dish we know today.

The Cultures Come Together

Filé is a popular spice and thickening ingredient for gumbo, made from dried and crushed sassafras leaves. Filé doesn’t have connections to settlers of the time, so historians believe it came from local Native American tribes. These tribes include the Choctaw, Tunica, and Chitimacha. Members would often intermingle with local settlers to trade ingredients and supplies.

With regards to the “Holy Trinity,” many cultures use onions and peppers to season dishes. However, the unique combination of onions, bell peppers, and celery, known as the “Holy Trinity,” may have come from Spain. The Holy Trinity is present in many other Louisiana staples that resemble Spanish dishes in look and flavor. One popular example is Cajun jambalaya and Spanish paella.

Meanwhile, the roux base used in almost all modern gumbos may have French origins. French roux usually takes a “blonde” hue and is used as the starter for sauces such as Béchamel or Velouté. However, the roux used in Louisiana gumbo is much darker. This could be due to trends in cooking and local influences from other non-French settlers.

The Savory Spectrum of Gumbo

As you probably know, gumbo isn’t a one-trick pony. There are endless ways to make it. At the end of the day, it really just comes down to what you have on hand. That’s precisely the reason why the dish was so popular with poorer families during the earlier days.

As long as you had ingredients for the base, you could add whatever protein you had to produce a satisfying meal.

Published in 1901, the Picayune’s Creole Cookbook provided a list of the main gumbo ingredients at the time. These included things like chicken, wild turkey, squirrel, rabbit, beef, veal, crabs, shrimp, vegetables, and cabbage. Surprisingly, older styles of gumbo were only thickened with okra or filé. These depended on what the cook had access to and what time of year it was.

There are records that show okra was popular for its flavoring capacity. However, before refrigerators were mass produced, okra was harder to keep fresh unless it was dried and crushed. It was during these times that filé was used as a more convenient substitute. Modern cooks find this surprising since the traditional butter and flour roux is an indisputable staple of gumbo.

The Gumbo of Today

With modern cooking practices and access to virtually any seasoning or ingredient, Louisiana gumbos today look a lot different than earlier versions. We’ve perfected the roux and flavoring base. We can source the most delicious, high quality meats. These advantages give us endless opportunities to experiment with flavors.

The most popular versions of gumbo today are chicken and sausage gumbo and seafood gumbo. These two categories have endless variations made with different seasonings, supplemental ingredients, and roux-making methods.

Some choose to include tomato within the base—as with popular Creole styles. Cajun cooks will add boiled eggs, vinegar, or spoonfuls of potato salad.

Elevated forms of gumbo, however, may feature harder-to-find proteins like quail, dove, or alligator. There are even vegan forms of gumbo..

While many people will claim that their preferred gumbo is the “correct” version, the truth is that gumbo is—and will always be—an ever-evolving group project that we’re all a part of. Little by little, young cooks add their own special touches, fresh trends emerge, and new ways to enjoy gumbo are added to the dish’s rich history. The next time you cook a gumbo, remember all the people and cultures that brought your dinner to life!

What’s your favorite way to cook a gumbo? Did you learn anything new about Louisiana’s most famous dish? Let us know in the comments!

Discover Our Y'all Inclusive Referral Program

Loving life at Pelican State Credit Union? Now you can easily share it with your friends and family—just like a delicious pot of gumbo—and potentially earn cool prizes when you do! Sign up today or learn more by visiting our member referral page.

People get SO MAD at me when I say I like tomatoes in my gumbo, like it has no place in Louisiana culture. It’s CREOLE, people.

Cajun gumbo doesn’t have celery us Cajun don’t use it, tomato and celery are used in Creole cooking Cajun and Creole cooking are not the same Creole use different spices..

Thanks for the shoutout, Ben! Are you cooking any Louisiana gumbo over there?

I wish reading about gumbo made me a better cook. My recipe did not work for me. I love to eat other people’s gumbo!sharon

Which recipe did you use? There are some great ones out there! Some local chefs have great step-by-step recipes, like this one from Paul Prudhomme: https://www.magicseasoningblends.com/recipes/chicken-and-andouille-smoked-sausage-gumbo/

Other peoples’ gumbo works fine as well, especially when it’s cold out!

i need help cooking my gumbo 🙁