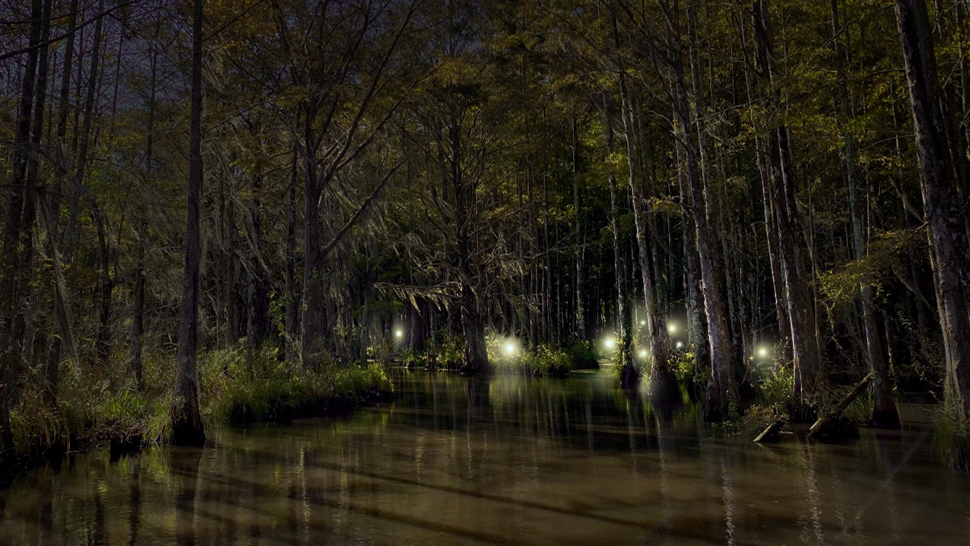 The word “light” is a term that is universally seen as a symbol of optimism. Its context in literature often represents knowledge and resolve where there is otherwise uncertainty. It illuminates the end of the troubling tunnel that we may find ourselves traveling through. Light is the figurative sun that eliminates darkness with positivity and peace.

What if I told you, though, that one iteration of light defines the term much differently?

Tales from Cajuns of old in the Pelican State depict a very specific form of light as a sinister force with the sole intention to lead you to your own demise.

Wow, did that get creepy in a hurry or what?

Not to fear (yet), as what I’m talking about has been neither proven nor disproven. Let’s explore the mystery of the eerie Louisiana legend known as the feu follet.

Shedding Light on the Subject

Feu follet (foo fow-lay) is a French phrase which translates to “marsh fire” or “crazy fire,” depending on who you talk to.

The phrase comes from the Acadians who were exiled by British command in the mid-1700s. Having Catholic heritage, thousands of Acadian families were ordered to leave their homes in North American British colonies because they refused to take on new Protestant influences.

The exiled Acadians migrated to several different places, but one group of about two hundred of them eventually settled in Louisiana, declaring it their newfound home. These thriving families eventually became known as Cajuns.

Many Cajuns today say that their grandparents and ancestors before them used to tell stories that on the darkest of nights, you could see mysterious glowing orbs looming over the Louisiana horizon. Witnesses of this phenomenon called these orbs “swamp fairies,” or the “feu follet.”

Feu follet is described as bright or flickering balls of light randomly dancing in the dark shadows of the bayou. They’ve supposedly been seen in different sizes, but the average size is said to be no larger than a candle flame.

The mystery of this phenomenon became greater, and eventually led to the requirement of some sort of explanation.

The Light Gets Brighter

Since the beginning of mankind, civilizations across the globe had various ways of explaining the world around them. Obviously, they did not have the technology we have nowadays, and information for how things worked was not easily accessible.

The feu follet was identified in some cases as the spirits of passed on loved ones coming back to bid their final goodbyes. This was a semblance of peace, assuring the Cajuns that their loved ones were visiting them once again and bringing them good fortune.

Parents would urge their children to never follow the lights in the swamp, explaining that it was a demon or monster trying to lure them to their early death.

While this explanation may sound like it was just a way for children to learn to listen to their parents and do what they say, you have to wonder what could actually be the root of this mystery. What could have been causing these strange balls of light?

Being Seen in a New Light

The feu follet continued to be attributed to the supernatural in Cajun folklore, but as time went on, modern science began to debunk the theory.

As we explain in our blog post on the Honey Island Swamp Monster, there are areas all over Louisiana that humans have not even set foot on.

There are about three million acres of marshy Louisiana terrain that are so desolate and difficult to access, they’re said to be as primitive and uncorrupted by man as anywhere in America.

Why is this important? Well, as so many sightings of the feu follet were from a far distance, it could have been that the people who witnessed these balls of light simply couldn’t get close enough to see what was actually causing it.

Science today suggests that phosphorescent lights that can be seen at night floating over marshy ground is simply the result of the combustion of natural gases such as methane.

These gases are emitted by organic decomposition, or decaying animal carcasses, and literally catch fire in the air.

The Light Shines On

Several stories are still told today of people seeing strange orbs of light, and some sightings have been reported in places you may not expect.

One of the oldest cemeteries in Lake Charles, Louisiana, has received many reports of glowing balls of light floating around headstones that accompany the graveyard.

One feu follet tale is from a group of friends who went exploring a countryside near Gonzales, Louisiana. They described seeing several multi-colored lights floating around at a distance in a field by a dirt road. The lights quickly started getting bigger and bigger, and they appeared to be charging towards them. Without asking questions, the group of friends left in a panic.

Regardless of the science that perhaps provides a perfectly logical explanation for this phenomenon, people all across Louisiana continue to tell the stories chronicled by their Cajun ancestors. As long as tales are still told and sightings keep occurring, the mystery of the feu follet will live on.

Have you ever seen or heard of the feu follet? Let us know in the comments below!

My Mama was from the Gibson/Houma area and remembers these fires coming from the swamp. She is now 95. I remember her telling me what they thought they were, but she has resolved to believe that they were coming from natural gas pockets.

I grew up speaking French. The word “Feu” means fire. We did not pronounce it “Foo.” I don’t know how to write the pronunciation down, but it’s not “Foo.”
Here’s a link…
https://youtu.be/cwbpkv3kqRc

I have heard of “the Gonzales Lights” since I was a little girl. Some stories tell of it actually chasing people and some even say it splits in two. I was always to scared to go see for myself. In high school we were told it was only swamp gas making the lights. Still a mystery after all these years..

Does anyone know the name of the graveyard in Lake Charles that they mention in this story? I wouldn’t be surprised if it’s the one located on Broad Street.

Hi, Rose. Thank you for your comment! The cemetery mentioned here is called Bilbo Cemetery. Do you know if that’s the one located on Broad Street? We would love to know more about it! The article states that there have been reports of the strange glowing lights since the 1840s!

We call them jack-0-lanterns. They’re the spirits of natives. They look like people fishy or walking around with lanterns. They stay the same distance from u as u try to approach them. Once ur lost the lights will surround u and start laughing. Then u’ll panic and start running and that’s where u end up killing urself. My dad and his triplet brother are experienced them in marksville. U go pass the cemetery then pass the old French cemetery then pass the native burial mounds into the swamps. Do that at night and u might run into them. It’s easy to get lost in the swamps especially at night