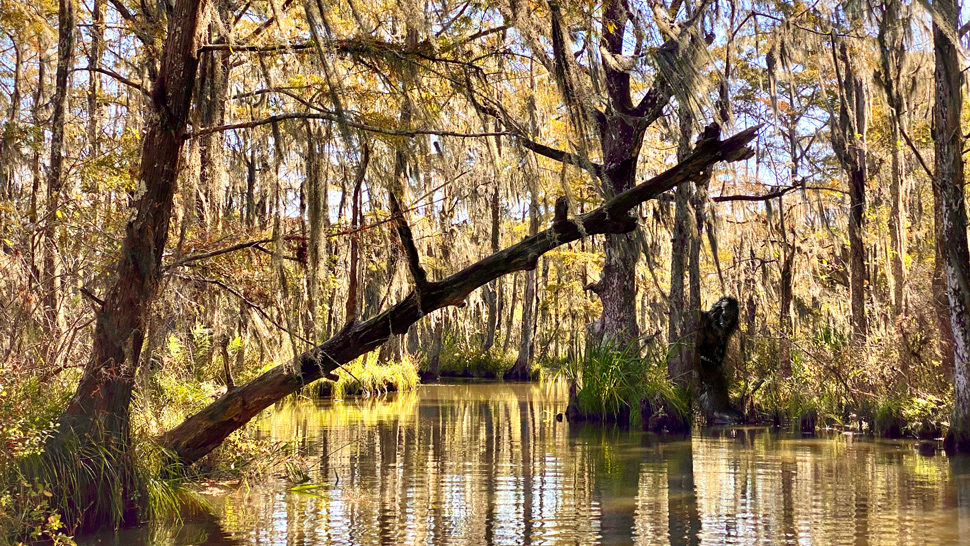 It’s dusk on the bayou. The sun sets in the Western sky and illuminates the Louisiana horizon a wondrous glow. Moss-filled cypress trees cast their gloomy shadows, the water is ominously still, and crickets chirp in the distance.

Suddenly, leaves on the ground start to crackle to the rhythm of stomping footsteps, bushes rustle, and an awful smell permeates the air.

The noise is faint, but only getting louder and louder. It’s apparent at this point that something is coming toward you—and whatever it is, it knows you’re here and doesn’t want you to be.

That sinister figure standing behind mangled tree branches and staring you down with haunting yellow eyes? Yeah, it’s time to get out of there.

Before you can even process what you just saw from across the bayou, you’re already in your car headed Westbound down I-12.

You just had an encounter with the Honey Island Swamp Monster—and there’s definitely nothing sweet about it, as its name would otherwise imply.

Just North of Lake Pontchartrain and on a bend of Old Pearl River, you’ll find the one and only Honey Island Swamp.

Earning its name from the abundance of honeybees (Louisiana’s state insect) that once inhabited the isle, Honey Island is one of the most pristine marshlands in the United States. Much of the nearly 70,000-acre swamp is government-protected, as it is part of the Pearl River Wildlife Management Area.

If you find yourself in the area, or on a guided tour, you’ll see just why Honey Island Swamp is the tourist attraction that it is.

You’re sure to find alligators, turtles, snakes, raccoons, wild boar, dozens of species of birds, and so much more—not to mention the absolutely incredible scenery.

There’s all kinds of wildlife that inhabit Honey Island, but legend has it, the swamp is home to something that is much more wild.

The Honey Island Swamp Monster has been called many different names—Louisiana’s Bigfoot, the Bayou Beast, and even the “Wookiee,” not to be confused with Chewbacca (for all my fellow Star Wars fans out there).

Theories and speculations about the beast started swirling nationally in the early 1960s, but stories from some locals date back hundreds of years.

Cajun and Native American folklore associates the swamp monster with the Letiche, which is described as a human-like creature that was raised by alligators after wandering into the swamp as an abandoned child.

Other tales allege that the swamp monster is the offspring of an alligator and chimpanzee, after a circus train crashed near the Pearl River resulting in several circus animals escaping.

Little to no evidence suggested the existence of such a creature, until one day, two hunters saw something they couldn’t believe.

The first documented sighting of the beast was from Harlan Ford in 1963.

Ford, a retired air traffic controller, used to fly a twin-engine plane to scout hunting grounds and potential hunting camp locations. He found the perfect spot for the camp, but it was so deeply secluded in Honey Island Swamp, he would have to drive half way by boat, then walk the other half of the way.

One day, Ford and a friend were hauling supplies to their camp when they noticed, from a distance, what seemed to be a large animal on all fours feeding on another animal.

Fearing the animal would get frightened and try to attack them, they quickly drew their guns. As soon as they did, the creature quickly stood up on two feet, looked them in the eyes, then took off running.

Ford documented what he saw that day in a letter that he later wrote. He described the creature as being over seven feet tall, having dingy, grayish hair, yellow eyes, and being accompanied by a disgusting stench.

“It looked like something from a horror movie,” explained Ford.

The Evidence is Revealed

Having witnessed something so strange, Ford became determined to spot the creature again.

Persisting to gather evidence for some 10 years, he eventually went back to the location where he first saw the creature.

On a trail near a small watering hole, Ford noticed what looked like the aftermath of a fatal fight for survival. Seeing spots of spattered blood on the ground, he crawled through shrubbery to the other side of the watering hole to find a wild boar that had just been killed and had its throat ripped completely out.

Next to the boar was a series of large foot prints in the mud. The foot prints, which were later cast by Ford using liquid plaster, indicated a massive, three-toed webbed foot.

Ford took the track castings to the local game warden and LSU’s College of Agriculture to be analyzed, but they could not identify what kind of animal left these tracks.

Ford went a step further in trying to find out more about what he saw that day. He decided to bring his camera with him every time he went to his camp.

It was thought that he was unable to ever capture any evidence of the beast on film, until a startling discovery was made.

Preserving the Legend of the Monster

Even after all these years, local hunters and fishermen, news stations, the Discovery Channel, and more have continued to preserve the legend of the Honey Island Swamp Monster. None, though, have covered the story as closely as Dana Holyfield.

Dana Holyfield is the granddaughter of Harlan Ford and has continued her grandfather’s research in the form of a documentary, a book titled “Honey Island Swamp Monster Documentations,” and more. All of her works can be found at HoneyIslandSwampMonster.com.

She was kind enough to take some time to speak with me over the phone and had a lot to say about her experiences and stories her grandfather used to tell her.

When her grandfather passed away, Holyfield was given a roll of 8mm film labeled “Honey Island Swamp Monster” that was stored in a box that Ford kept in his home. It had not been seen by anyone besides Ford.

The film reveals what Ford was shooting one day from a tree bling he set up. A large, bi-pedal creature is faintly seen in the video roaming the woods from about a hundred yards away.

Cryptozoologists have analyzed the footage and, while a bit unclear, they didn’t rule out the possibility that such a creature exists.

When asked about her thoughts on the existence of the monster, Holyfield told me that if there were a creature like this out there somewhere, Honey Island Swamp would be the place for it. “Wildlife and Fisheries protects large sections of the swamp and there are parts of the swamp that man has not set foot on.”

I was intrigued on why Ford decided not to show anybody what he captured on video. Holyfield said that her grandfather was worried that someone would mistake the monster for a fellow hunter and get hurt or killed.

More on her grandfather’s decision to not reveal some of his research findings, Holyfield said, “He was so interested in learning more about what he saw, maybe he learned more than what we thought he did.”

Hi again, I love these little blogs on Louisiana. I actually did watch the show on Discovery Channel about the Honey Island Swamp Monster. Thanks for further information for me to check into.

Hi, Dianne. We’re so happy to hear that you’re enjoying our blog posts! We love getting to showcase all of the incredible things about our great state. Feel free to check out the rest of these types of blog posts by selecting the “Louisiana Love” category under the “Fun” tab on the left.

Thank you so much for your interest and engagement in Pelican State of Mind!