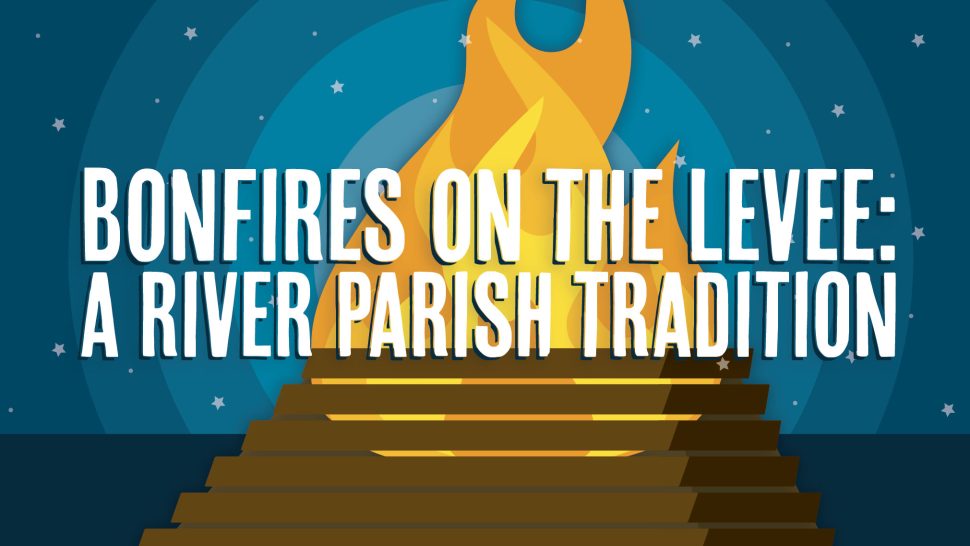 The thought of Christmas Eve brings images of twinkling tree lights and sparkling ornaments. Hanukkah or Kwanzaa might conjure up images of candles, gold menorahs, or wooden Kinaras. Those celebrating Yule might think of the burning of a Yule log in their fireplace.

However, take a drive down River Road through the River Parishes in Louisiana, and you’ll find a much warmer tradition—bonfires on the levee.

What do a giant wooden pelican, paddlewheel, and snowman have in common? They’re all creatively shaped pyres set alight on Christmas Eve.

These annual bonfires blaze midway between New Orleans and Baton Rouge in a part of Louisiana known as the River Parishes—St. John the Baptist and St. James Parish. The bonfires come in all shapes and sizes, but the most common is a pyramid-shaped cone.

The spectacular display stretches throughout 30 miles of levee on both sides of the Mississippi River, and some of the bonfires even reach a height of 20-to-30-feet.

Traditionally, family members and friends build the pyres using logs, cane reed, and bamboo a week before Christmas Eve. Revelers gather again on Dec. 24 to watch the fires burn, eat holiday food, and mingle. The building and bonfires are usually family-centered with family members taking the time to bond while building the pyre.

Although the tradition of private, family-centered bonfires still exists, the celebration has grown since the 1980s with tourists also taking part.

The creativity of the bonfires evolved as the tradition reached wider audiences. Instead of pyramid-shaped bonfires, builders began creating more complex pyres. In 1985, a pyre was built in the shape of a mansion with two circular staircases.

The building of fun and creative pyres continues today and attracts even bigger audiences. In some areas the bonfires take on a festival atmosphere with fireworks and visitors bringing ice chests of drinks and food.

History of the Bonfires

The true origins of the tradition are lost to history, but a prominent theory exists.

It goes that French Marist priests established the tradition when they arrived in St. James Parish after the Civil War. The priests taught at Jefferson College, a Catholic college in the area.

This story is further corroborated by oral documentation of George Bourgeois, a former Jefferson College student, lighting Christmas Eve bonfires in Mount Airy. Mount Airy is an unincorporated community within the River Parishes. Bourgeois stated that he picked up the custom while a student at the college.

Why were the priests lighting the bonfires, you ask? Well, to provide light for people attending Christmas Eve Mass or to light the way for Papa Noël—depending on who you ask.

The tradition of ritual lighting of bonfires is a centuries old practice found all throughout the world. In India, the Winter Solstice is celebrated during Lohri festival. During Lohri, people burn bonfires, dance, and feast on peanuts and sweets. In Kyoto, Japan, people celebrate the end of O-Bon season with a Buddhist bonfire. Nordic countries celebrate the end of the Christmas season and New Year with bonfires as well.

The Marists priests may have gotten the idea to burn bonfires on the levees from the French custom of feux de joie, which translates to fire of joy. The fires burned as part of holiday celebrations like Eve of the Epiphany, New Year’s Eve, and Christmas Eve. Some areas of France lit bonfires during the feasts of patron saints.

Getting to the Bonfires

The bonfire lighting begins at 7 p.m. on Christmas Eve. Those interested in visiting can reach River Road through Louisiana Highway 3213. If you exit before Veterans Memorial Bridge in Gramercy, you’ll find the first bonfires on the levee. Driving down the length of River Road in St. John the Baptist and St. James Parish allows you to catch the entire bonfire show.

Remember two things when preparing to go watch the bonfires—get there early so that you can watch the beginning of the lighting and expect traffic.

Do you have any interesting holiday traditions? Let us know in the comments below!