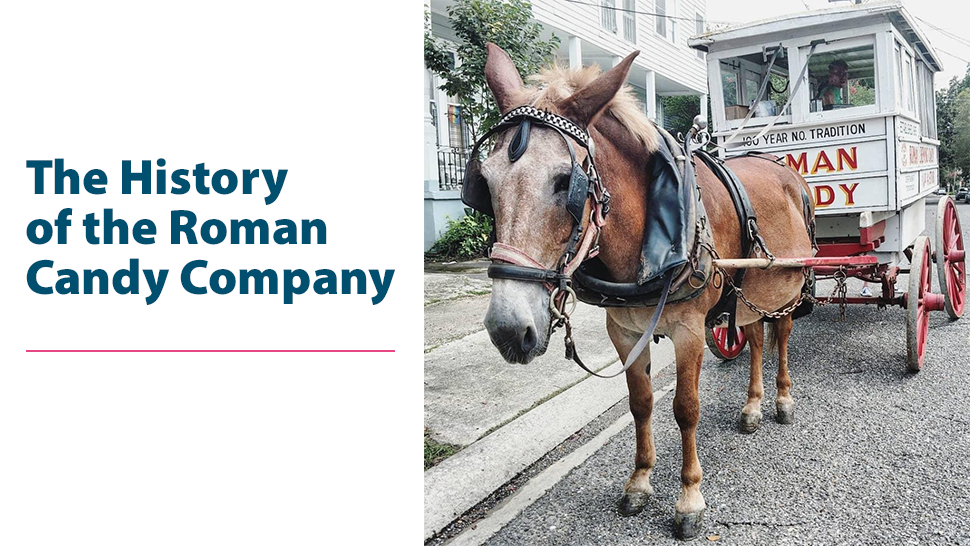 All images courtesy of Daniel Kottemann.

If I told you that one of the longest-running and most beloved food businesses in New Orleans was a 1900s kitchen on wheels whose star employee was a mule named Miss Mae? Would you believe me?

On any given day in the Crescent City, you may just stumble upon this particularly sweet tradition.

First you’ll notice the sounds of a ringing bell and clopping hooves striking the asphalt. Then you’ll see a man inside a wagon spinning his delectable gourmet taffy. These sights and sounds only mean one thing—the presence of the Roman Candy Company!

Let’s get rolling and learn more about the Roman Candy Company and the fascinating history that precedes it.

A Recipe for Success

The Roman Candy Company’s success story begins in the rolling hills of late-1800s Sicily. Angelina Napoli Cortese, a confectioner, created her own candy recipe, and began making the candy for friends and family.

Angelina and her family eventually emigrated from Sicily to New Orleans. In 1889, she gave birth to her son Sam Cortese. Although he wouldn’t officially found the Roman Candy Company until he was 26, Sam’s entrepreneurial spirit developed much earlier.

Sam tragically lost his legs in a streetcar accident at the age of 12. He took on a full-time job as a street vendor after he was kicked out of school because of his disability. He sold seasonal crops directly from a goat cart that his father made to help him get around.

Angelina continued to make her taffy on the side and would sometimes give Sam leftovers to sell from his cart. Here’s where this story takes a turn for the best.

“After a while, Sam decided to stop selling the crops because nobody was interested in them anymore,” co-owner Daniel Kottemann said. Daniel is also Sam’s great grandson.

“The taffy was the moneymaker.”

The taffy went from being a Cortese family recipe to a treasure and irresistible to everyone in the city!

After a few years, Sam realized that he wasn’t meeting the city’s demand for his product. He needed a way to produce more taffy and get it in the hands of more customers.

In 1915, he partnered with a local craftsman named Tom Brinker. The two built a custom wagon made specifically for taffy-making. The wagon had everything Sam needed to make his taffy. Once it got rolling, the Roman Candy Company was born.

Sam’s business quickly ascended. He could now bring the taffy directly to his customers. With the help of his horse, Sam went all over town selling sticks of taffy from the wagon’s window.

One hundred years later, Sam’s candy wagon withstood the test of time and is still used to this day.

Fast forward to the early 1960s—not much changed. Sure, Sam got older, but his taffy business remained just as successful. One day, while Sam was visiting his grandson, Ron Kottemann, he asked him, “You want to make some money?”

Even as a young boy, Ron was more than happy to oblige. Ron knew almost immediately that taking on the family business was his calling.

His first time selling the candy was outside of Tulane Stadium in New Orleans.

In 1969, Sam passed away after 59 incredible years of running the Roman Candy Company. Ron, being a young adult at this point, decided to honor his grandfather and pick up the family business full-time.

A Look at the Candy Company Today

Today, Ron Kottemann, his mule Miss Mae, and the original Roman candy wagon sell taffy through uptown and downtown New Orleans. Ron’s son, Daniel, sometimes even parks a second wagon at the Audubon Zoo for zoo-goers to get their taffy fix.

“Because of its age, the original wagon has to be updated from time-to-time, so the second one fills in when we need it to,” said Daniel.

Thanks to Ron and Daniel, Angelina’s recipe and Sam’s dedication to sharing it with the world live on.

New Orleans residents have cherished the delicious gourmet taffy and charming family business for years. It’s even seen as a symbol of hope.

Hurricane Katrina brought catastrophe to New Orleans in 2005, but that didn’t stop Ron from continuing to sell his taffy. In dark times, New Orleans residents found happiness and optimism in the sound of those clopping mule hooves and wagon bell. Almost two decades after Katrina, New Orleans families still associate the Roman Candy Company with joy.

Now sold at $1 per stick, the taffy is available in chocolate, vanilla, or strawberry flavors. If you’re feeling extra adventurous, you can even combine all three flavors for a wonderful Neapolitan bite.

You can find the candy at either one of the wagons. You can also order your Roman Candy online at www.romancandy.com.

With over 100 years of operation for the Roman Candy Company, you’d think there’s got to be an end in sight. Well, Daniel Kottemann would disagree.

“Whenever the time comes, I plan on taking over and keeping everything as traditional as possible,” he said. “I’m going to keep making the candy by hand—just the way we’ve always done it.”

Have you ever heard of the Roman Candy Company or tried their world famous taffy? Let us know in the comments below!