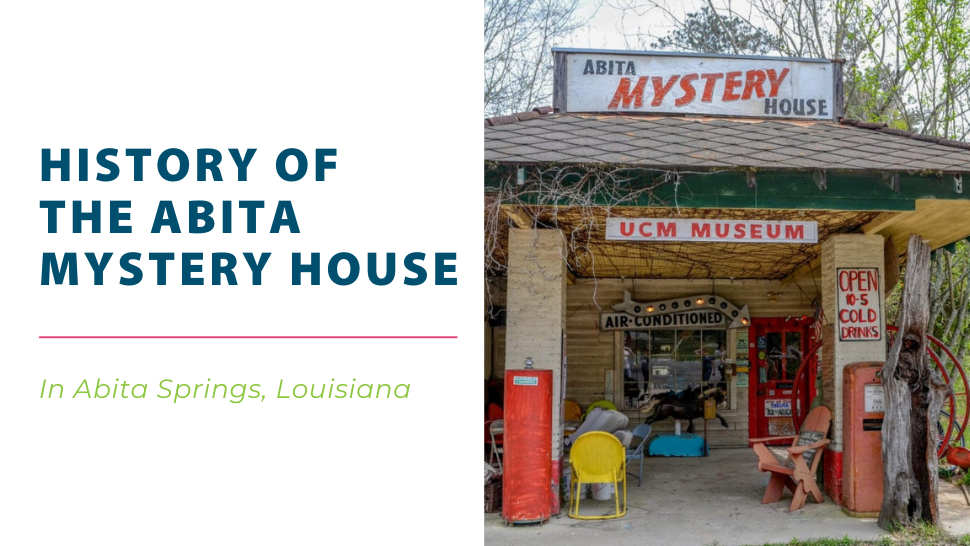 If you ever doubted the wisdom of heeding your inner voice, doing what makes you happy, or following your own path, there is a place in Louisiana that’s sure to convince you to do all three. Today, it goes by the name of the Abita Mystery House. It’s located in Abita Springs, and it’s a colorful meld of artsy creativity, wry humor, Southern culture, and thought-provoking celebration of the commonplace.

A native of New Orleans, John Preble found his true calling in life around the age of 50. He’d been a professional fine artist specializing in distinctive portraits of Creole life prior to his mid-life revelation. He’d also juggled “at least 20 jobs” based on an interview he had with South Writ Large.

Preble traveled to Albuquerque, New Mexico, with his wife and two boys to visit friends. It’s there that he discovered Tinkertown, the creation of another professional artist turned curator, Ross Ward.

Ward’s Tinkertown was a curious yet painstaking collection of anything and everything all paying tribute to the Old West. People traveling from all over the world came to marvel at the folksy roadside attraction.

Preble decided the Deep South needed its own superlative in roadside attractions — one maybe even bigger and better than Tinkertown. It would be in Louisiana, and he would be its creator, curator, and keeper.

Preble christened his venture the UCM Museum, finding humor in how “You-see-em” rhymes with the word museum while also standing for Unusual Collections and Miniatures. He opened it in 1998 in Abita Springs, Louisiana.

His attraction was stuffed full and decked out in trinkets. They included little items he’d collected since childhood, items and memorabilia he’d scavenged over the years and held onto.

He put it all together in one sprawling place, and people came to see it. They were even willing to pay a small admission fee, and they enjoyed feeding the coin-operated novelties and pushing the buttons on the mini-dioramas. They smiled at Preble’s assertion that three of anything is a collection as they wandered the grounds.

Preble had found both his artistic outlet and his vocation. Anyone visiting the New Orleans area now had a new museum to see.

Preble found himself having to explain the name he’d originally chosen for his venture. The U-C-M, while clever, required too much unpacking for people to get on their own.

He found his solution in the Winchester Mystery House — a 160-room Victorian mansion in San Jose, California, that Winchester rifle heiress Sarah Winchester had continually expanded in an effort to appease or evade the spirits of all those killed by Winchester rifles. Nothing terrible had ever happened there, but people loved the idea of a mystery house, and so did Preble.

The UCM Museum became the Abita Mystery House in 2005 and continues to host visitor that are eager to experience Preble’s amazing presentation of his collections and creations.

What can you look forward to seeing if you go to the Abita Mystery House? Everyone — including Preble—will tell you that you’ll always see something new or something that you missed before.

Preble makes a practice of creating something new every single day. Some items, however, have become Abita Mystery House signature favorites:

With every crevice inside and every space outdoors filled with something to see, read, think about, or chuckle at, Preble’s interpretation of a mystery house is a light-hearted expression of the human experience we all share.

If you’re ever looking for fun places to visit in Louisiana, definitely add this stop to your list. You won’t be disappointed, and you’ll definitely discover something new!