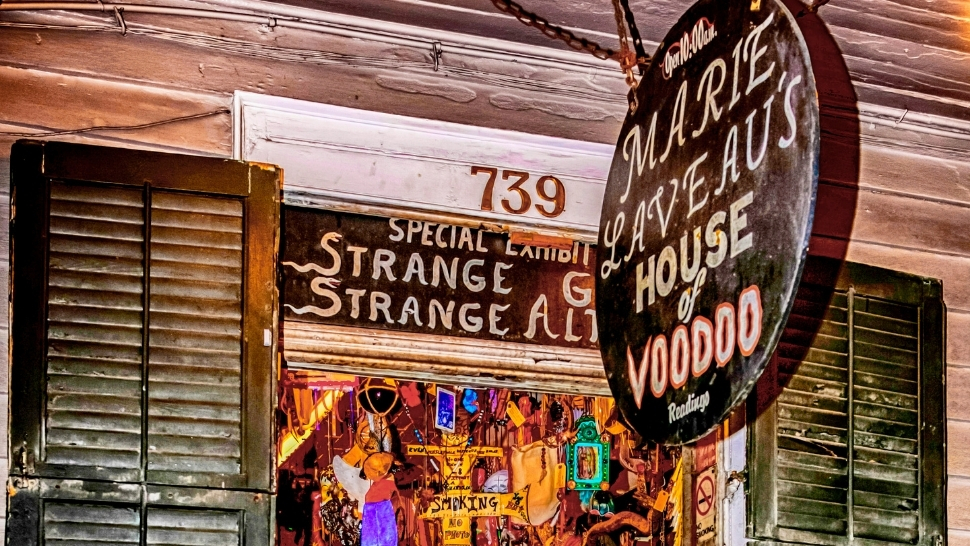 Much like the city it calls home, the history of New Orleans Voodoo is fascinating. Voodoo has been ingrained in Louisiana culture for over three centuries.

Don’t let Hollywood depictions fool you. Voodoo doesn’t involve sorcerers, potions, dark magic, or a doll being poked with a sewing needle. Voodoo is an authentic religion, still practiced today around the world, and is much more complex than you may think.

Let’s take a deep dive into what New Orleans Voodoo is and explore key historical moments that shaped it into what it is today.

Before Voodoo there was Vodou

Vodou represents the union of the West African Vodun religion and Roman Catholicism. The religion encompasses the beliefs of the descendents of enslaved Dahomean, Kongo, Yoruba, and other ethnic peoples. The practice of Vodou began in the Saint-Domingue colony, and eventually spread to New Orleans.

“Everything is spirit” is the fundamental basis for Vodou . The religion encompasses several values including philosophy, medicine, justice, and religion.

The religion worships one supreme creator. Practitioners consider this creator too remote to reach directly, so they use intermediary spirits, called “lwa” or “loa.” Lwa act as mediums between the physical realm and spiritual realm.

Vodou found a new home when Haitians that practiced the religion arrived to New Orleans in the early 1700s. Vodou remained the same with little interruptions for over 100 years although it traveled across an ocean. Present-day Congo Square, located in New Orleans’ Armstrong Park, was a prominent Vodou gathering place for enslaved people.

It wasn’t until the early 1800s that the religion took on a new version of itself.

A mixing of traditions took place during the transfer of West African customs to Saint-Domingue and to New Orleans. As more slaves from Saint-Domingue arrived in New Orleans, Vodou developed a stronger presence in the Catholic colony.

The presence of one creator and “lwa” becoming synonymous with Catholic saints further cemented Catholicism’s influence on Vodou. Vodou became known as Voodoo in the United States, and the misspelling embraced by practitioners in Louisiana.

One of Voodoo’s most well known practitioners is Marie Laveau, Louisiana’s Voodoo Queen. Laveau, a devout Catholic, practiced Catholicism and voodoo simultaneously. She rose to prominence by feeding the hungry, counseling high-ranking businessmen, and nursing the sick back to health.

In the mid-to-late 1900s movies, television, and books caused Voodoo to become a pop culture phenomenon, albeit misunderstood.

While it’s less common in New Orleans than it was in the 1700 and 1800s, the New Orleans Voodoo religion remains in practice by residents across the Crescent City. The Voodoo Spiritual Temple, located across from Congo Square, serves as a place where people can go for Voodoo consultations, rituals, lectures, and more.

You can even find numerous interesting voodoo artifacts around New Orleans in shops such as Voodoo Authentica and Marie Laveau House of Voodoo.

Voodoo is cemented as a pillar in Louisiana culture due to its historical significance and commercialization. New Orleans will continue to be the epicenter of this religion with origins as far back to ancient Africa.

Have you heard of New Orleans Voodoo or have any stories that you’d like to share? Let us know in the comments below!