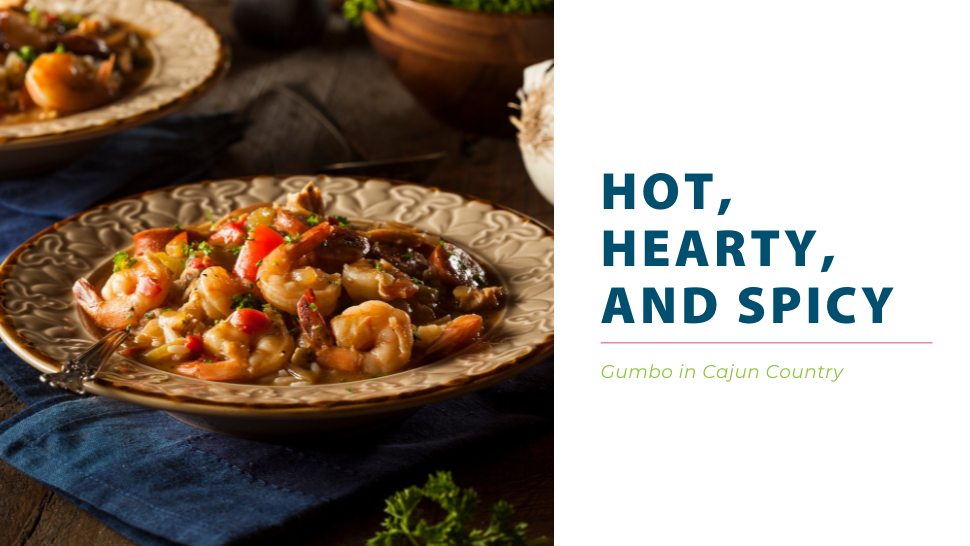 Most people who are not from Louisiana couple the word “Cajun,” with spicy, peppery food such as gumbo. Those of us who live here know how inaccurate that is because heat is just one aspect of Cajun cuisine. Let’s explore the region of Louisiana known as “Cajun Country,” and then take a dive into Cajun Gumbo.

Cajun Country, primarily located in the south-central portion of Louisiana, makes up a region known as Acadiana. In 1971, the Louisiana legislature recognized 22 parishes designated as Acadiana. These parishes stretched just west of New Orleans to the Texas border and from the Gulf coast inland about 100 miles to the city of Marksville.

Nine parishes in the center of this region make up “Cajun Heartland, USA.” These parishes are Lafayette, Acadia, Iberia, St. Landry, Evangeline, St. Martin, St. Mary, Jeff Davis, and Vermilion. While some debate whether “Acadiana” actually consists of these nine parishes or all 22. However, Cajun and Acadian heritage has influenced this entire region.

Acadiana is known for its natural beauty including abundant bayous, swamps, marshes, prairies, and farmland. Hunting and fishing opportunities abound, and these traditions are deeply ingrained in the local culture.

A Little Background on Cajun Culture

In 1775, the exile of Acadians from Nova Scotia established the cornerstone of Cajun culture in Louisiana. Many of these exiles settled along the bayous and swamps of Louisiana.

Cajun culture is unique. It has its own cuisine (which would eventually become world-famous), musical styles, and dialect, known as Cajun French. The culture also revolves around strong family ties and closeness to the land and environment. The influence of Cajun culture is evident in common activities such as “fais do-do” (Cajun dance party) and “boucherie” (traditional pig roast).

These cultural influences are evident in local celebrations like Festivals Acadiens et Creoles, the Spanish Festival and Germanfest. As a whole, the communities within Cajun Country are often a mixture of people of all ethnicities, socioeconomic classes, and heritages.

Gumbo is one of the most popular dishes in Cajun Country. With the summers being hot, locals look forward to the first cool front, which signals the beginning of “gumbo weather.” That means a pot of simmering gumbo in most kitchens in the region.

So exactly what kind of gumbo will that be? In Acadiana, Cajun gumbo is naturally the first choice for many. This starts with a very dark roux to create a rich broth, and then flavored the “holy trinity“. Virtually any type of protein, from smoked andouille sausage to poultry, red meat, wild game, or seafood is also added.

That’s not to say Creole gumbo doesn’t have fans in Acadiana. Some do prefer this version of gumbo. Creole gumbo starts with a light roux, and then flavored with ham or other smoked meats, okra, and tomatoes. Seafood is most commonly used as the protein. Filé powder (ground sassafras leaves) often flavors and thickens the gumbo as opposed to flour.

Now, let’s get down to some specifics about gumbo in Cajun Country. If you were to look at restaurant menus in this region, you’d basically see a competition for most creative gumbo.

A few prime examples include fried chicken and andouille, smoked goose and foie gras, stuffed quail, and chicken chorizo. Others are lamb and sausage, oxtail and tasso, alligator and andouille, and catfish with bacon and venison sausage.

While these versions of gumbo are viewed as “gourmet,” there are also unusual gumbos with long traditions in Cajun Country. First the Creole inspired, “seven-steak and okra gumbo,” made with a cut of beef similar to bone-in round steak.

Then there’s “dried shrimp and egg gumbo.” These tiny, sun dried crustaceans are pungent in flavo and sold throughout the region. They’re available whole or in powdered form. The dish also features whole, peeled hard-boiled eggs which make it a very distinct version of gumbo.

While all of these gumbo creations are interesting, the most popular recipes with home cooks are usually much simpler. For example, chicken and sausage gumbo or seafood gumbo tend to be go-to options.

These are just a few examples that make the region of the most exciting places to eat.

Are You Ready to Get Your Gumbo On?

With so many gumbos to choose from, you’d enjoy visiting Cajun Country to try a few of the tasty creations. Or maybe you’ll be inspired to try something new and adventurous the next time you cook! You might just end up finding a new favorite version of gumbo.

Hopefully you’ve discovered something new and interesting about the gumbo in Cajun Country. We’d love to hear about your favorite version. Let us know your thoughts on Cajun Country gumbo and traditions in the comments below!