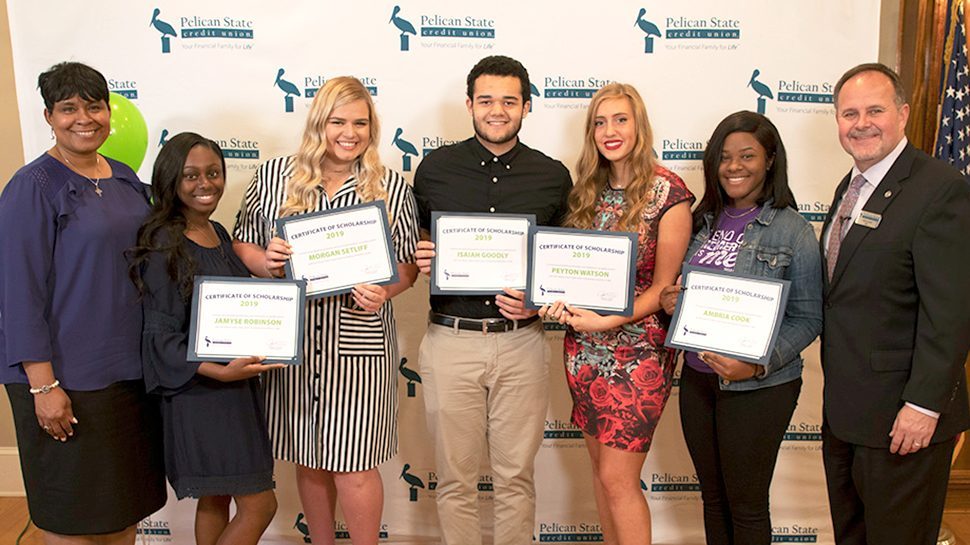 Our team members get such joy out of receiving our Team Pelican Scholarship submissions each year. Louisiana is filled with so many bright, service-driven high school students, and we’re honored to be able to provide scholarship awards to them!

Looking for other scholarships?

We’re excited to share our 2019 Team Pelican Scholarship award winners, including the winner of our two new awards, the Pelican Perseverance and Heart for Service awards! Read about our winners’ accomplishments and some of the goals they plan on achieving in their lives:

Kendall graduated from East Ascension High School, where she was a member of the Distributive Education Clubs of America, the National Honor Society, and served as Secretary for the Co-Operative Marketing Education program.

She volunteers most of her time with her church and their community events by helping them live stream, record, and run sound.

Her goal in life is to be an advocate for young children, and she aspires to work hard to create a financially-stable life for her and her family.

Lora is a graduate of Captain Shreve High School, where she was named a Student of the Year finalist and won the Scholastic Writing Silver Key. She served as Vice President of the Student Council and was a member of the Beta Club and Mu Alpha Theta.

She says that if she could accomplish one thing in her life, she would choose to open her own pharmacy to help others.

She served as President of the Louisiana Junior Braford Breeders and the South Cameron High School Future Farmers of America.

She volunteers her time at the Louisiana Fur and Wildlife Festival and helps out with several events at her church.

She says if she could accomplish one thing in her life, it would be to get a civil engineering degree and build a bridge connecting east and west Cameron Parish so that residents won’t have to rely on the ferry anymore.

Isaiah graduated from Alfred M. Barbe High School, where he was a member of the National Honor Society and played Academic All-State Basketball. In his spare time, he volunteers to teach children to play basketball for his church.

His goal in life is to be a great provider for his family. He wants to be successful so that his future wife and kids never have to struggle. He says he aims to work hard so that even his parents and sister are taken care of since they’ve done so much for him in his life.

Ryan is a graduate of The Runnels School. He received the Outstanding Achievement Award in World History and represented Runnels at the District Rally for Algebra 2 and Chemistry. He is also a 4-year member of Mu Alpha Theta and Beta Club, and he served as Student Ambassador.

In his free time, he volunteers at St. Vincent de Paul to make sandwiches for the homeless and at the Baton Rouge Food Bank.

If he could accomplish one goal in life, he says that he would want to win a major golf tournament and donate the funds to the food bank to help his community.

Her volunteer work includes working with Habitat for Humanity, Red Cross, and Be You Girls Mentoring Group.

She says that if she could accomplish one thing in her life, it would be to own her own interior design business and be one of the most successful businesswomen in the world.

Madeline is a graduate of Episcopal School of Acadiana, where she served as Co-leader of the Art Club and Book Club and won the Musical Theatre Award.

Her goal in life is to be an art historian. She says that she’d love to explore and see how history and those societies’ ideals shaped our current world.

Peyton is a graduate of Denham Springs High School. She has volunteered her time at the St. Vincent de Paul soup kitchen on Thanksgiving and Christmas Day for the past four years and volunteered at Vacation Bible School each summer for the past six years.

She served as captain of the powerlifting team and President of the Senior National Honor Society.

If she could accomplish just one thing in her life, she says she would like to be a professor. She loves watching people blossom and wants to enrich the lives of those around her with education.

David graduated from Ruston High School. During his time there, he was selected as a DARE Role Model, a National Merit Finalist, and a member of the Students Actively Involved in Leadership Program.

He served as a Student Council Representative and Library Manager for the Ruston High School Marching Band.

He says his goal in life is to discover a viable method for nuclear fusion energy to ensure humanity has access to cheap, inexhaustible energy.

Sydney is a graduate of Buckeye High School, where she was elected President of the National Honor Society and nominated to participate in the National Youth Leadership Forum twice.

She says that if she could accomplish one thing in life, it would be to find a career that she loves that would allow her ample family time to have the perfect work-life balance.

Kennedy graduated from Academy of the Sacred Heart. While there, she served as Student Council Vice President, Class President, and varsity soccer and volleyball co-captain.

She volunteers her time at Our Lady of Prompt Succor Nursing Home and has helped organize fundraisers for student education through Hearts for Haiti.

She has always had a deep interest in space and astronomy, and says that if she could accomplish one thing in life, it would be to contribute to those scientific advancements.

Ambria is a graduate of Kentwood High Magnet School. She was on the Dean’s List and named Valedictorian for her class.

Her volunteer efforts include cleaning up the town of Kentwood with her varsity cheer team.

She says that if she could accomplish one thing in life, it would be to travel the world and learn about all of the different cultures to experience new ways of living.

Out of State – Kristopher Jones

Kristopher is a graduate of Full Armor Christian Academy in Texas. She served as the Key Club Treasurer and Student Council President as well as varsity basketball and volleyball team manager.

She volunteers her time tutoring younger students and organizing the local food bank.

Kristopher says that her goal in life is to graduate from the Massachusetts Institute of Technology and create a device that helps the movement of prosthetics.

The Heart for Service and Pelican Perseverance awards are new for 2019. We based these awards off of values we hold dear at Pelican.

Morgan took home both of these special awards, which isn’t surprising considering she has worked over 100 community service hours alone! Morgan’s volunteer work includes tutoring, serving food to the homeless, fostering animals, and giving back to children in need at Christmas.

Morgan has also overcome great hurdles in her life. During high school, Morgan was diagnosed with and treated for a disorder called Pseudotumor Cerebri, which is also called intracranial hypertension. She had to undergo several procedures, but eventually overcame her struggles with the disease and flourished despite its effects on her physical and mental health.

Congratulations to all of our Team Pelican Scholarship winners!

We want to hear from you! What do you think of our scholarship winners’ essay answers?