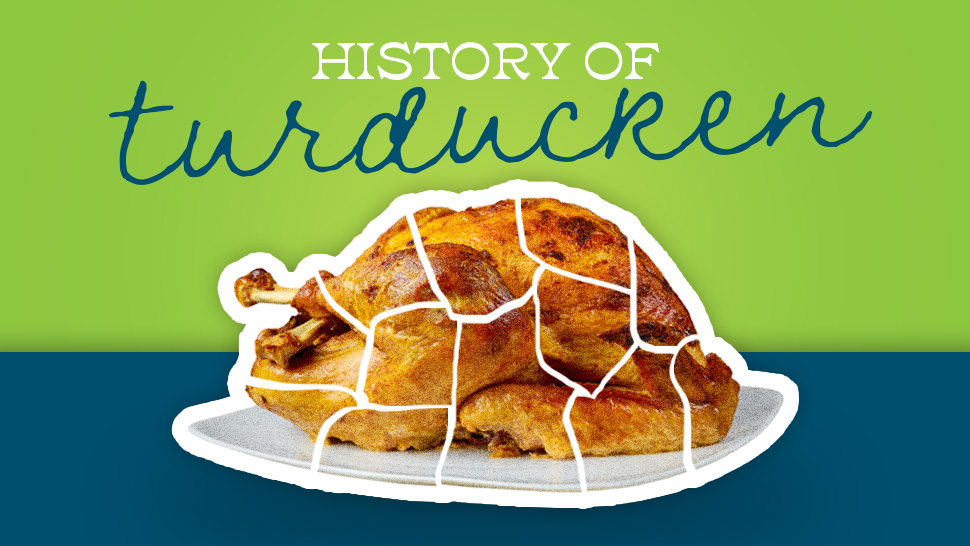 The air becomes crisper, sweaters are pulled out of their summer slumber, and the leaves change color…well, not necessarily in south Louisiana, but definitely somewhere in the United States.

South Louisiana autumns are often unpredictable. You may need a sweater one day, and sunbathe the next. The air is sometimes brisk, sometimes stifling, and the leaves don’t really change, either.

However, one tried and true tradition for many in the state is turducken for Thanksgiving.

“What’s turducken?” you might ask. The history of this triple-stuffed bird is as complicated as the recipe, but we’re here to help you understand it.

Stuffing or dressing (as it’s known in the south) is added between each layer of fowl. The dressing depends on preference—some people prefer cornbread dressing, while others prefer seafood dressing. After being stuffed, the dish is baked in the oven for a few hours.

The concept behind turducken isn’t new. The practice of stuffing one animal into another dates back to sometime between the fall of the Roman Empire and the Middle Ages.

The dish didn’t gain widespread popularity until 18th and 19th century. The aristocracy of the time period really enjoyed showing off their wealth by presenting guests with the delicacy.

If you think the turducken illustrates humanity’s knack for inventiveness, then the rôti sans pareil will solidify it. Rôti sans pareil consists of 17 birds of various sizes stuffed into one another. The dish includes turkey, a goose, a pheasant, a chicken, a duck, a guinea fowl, a teal, a woodcock, and a partridge among other fowls. The very last bird in the concoction is only big enough to hold one single olive. Unlike the turducken, the dish doesn’t include dressing.

The Yorkshire Christmas Pie made its appearance at Windsor Castle in 1858. The “pie” isn’t a pie at all, but a widgeon stuffed in a grouse and then a snipe, woodcock, partridge, pheasant, goose, and turkey. The dish also includes bacon, ham, truffles, and calf’s feet. The final step includes wrapping the fowls in a crust and baking them.

Imagine trying to stay awake after eating that for Thanksgiving!

It’s important to know that the engastration wasn’t only a sensation in the west. Chefs throughout the globe used the technique. There are references to a multi-meat creation from late 1800s India. This dish includes a chicken, turkey, and goat stuffed inside a camel. The Inuit of Greenland cook a dish known as Kiviak, a seal stuffed with up to 500 other birds.

Today, the gooducken, the royal roast, and the five-bird roast reign supreme in the United Kingdom and Europe. They’re a simpler version of the rôti sans pareil and the Yorkshire Christmas Pie.

Now here is where the story gets a little complicated.

Turducken started showing up on the Thanksgiving tables of Louisianans in the 1980s. The inventor? The late Cajun chef Paul Prudhomme. Well, at least Prudhomme claimed that he invented the dish in the late 1970s while camped out in a Wyoming lodge.

However, some debate Prudhomme’s assertions. According to brothers Junior and Sammy Hebert, they invented turducken in 1984. The brothers own Hebert’s Specialty Meats.

They state that the concept for turducken came about when a farmer came to the butcher shop and asked them to cook a duck within a chicken within a turkey. The brothers added cornbread dressing as an extra treat.

Others argue that the turducken wasn’t born out of Prudhomme or the Hebert’s imagination at all, but out of the collective minds of the people of south-central Louisiana. The dish slowly coming together throughout the years as home and restaurant chefs put their inventiveness to work.

Regardless of who invented the dish, the fact remains that Prudhomme trademarked the name in 1986. He included the recipe in his 1987 cookbook, The Prudhomme Family Cookbook: Old-Time Louisiana Recipes by the Eleven Prudhomme Brothers and Sisters and Chef Paul Prudhomme.

Turducken slowly grew in popularity in Louisiana throughout the 1980s and 1990s. In the late 1990s, the dish’s popularity exploded with the help of none other than John Madden.

Madden tried the dish in 1997 and loved it. He started bringing turducken onto Thanksgiving football broadcasts and would even gift it to the winning team.

From there, turducken continued to grow as a Thanksgiving favorite across the United States. Nowadays, the dish can be found in grocery stores, butcher shops, and Thanksgiving tables throughout the country.

While mystery shrouds the origins of turducken, it’s undeniable that the dish and its predecessors are evidence of humanity’s inventiveness.  It’s also undeniable that the triple-stuffed bird is a staple on many Thanksgiving tables and will continue to be so for years to come.

Have you ever tried turducken? Let us know in the comments below!