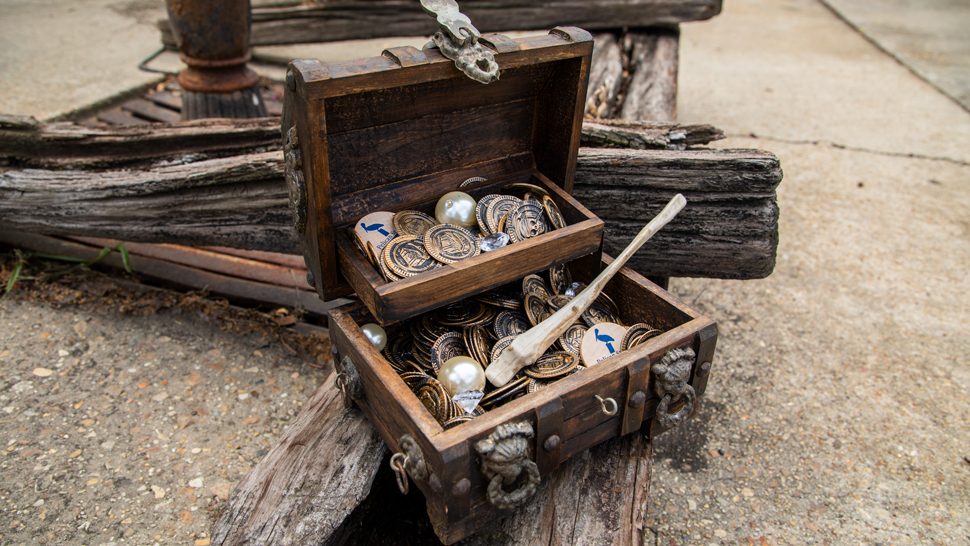 There’s mystery afoot! A treasured mystery, that is.

Stories of hidden treasures have been told time and time again in children’s books, video games, shows, and movies—but what if they weren’t made up just for the sake of storytelling? What if these stories are factual?

History suggests there is a possibility that hidden treasures—gold coins, doubloons, precious jewelry—are somewhere beneath the surface just waiting to be found! But why? And where?

Louisiana’s most well-known buried treasure mystery still to this day is the unfound treasure of Jean Lafitte.

Jean Lafitte, a one-time resident of Louisiana and privateer, is believed by some to have buried a large cache of treasure somewhere in the bayous of Louisiana. Other variations of the mystery say Lafitte buried the treasure in multiple locations along the Gulf Coast.

This information begs the question, though, “How did Jean Lafitte have treasure in the first place, and if he did, why would he leave it behind?”

Before we dive into these uncharted waters, we need to know more about who Lafitte was.

The Story of Jean Lafitte

Jean Lafitte was born in France around the year 1780 and traveled to the United States when he was in his early twenties. Exactly where he was from remains a bit clouded, but what is clear is that he settled in the New Orleans area with his mother and brother in the early 1800s.

Lafitte became very familiar with, and eventually mastered, an illegal smuggling profession, which translated into an extremely lucrative career for him. The business was so profitable because Lafitte was selling smuggled, foreign goods to the people of New Orleans. These goods were at a high demand and otherwise illegal due to the Embargo Act of 1807.

During this time in New Orleans, Lafitte became a very rich man, acquiring extraordinary amounts of money, ships, and weapons.

Some tales even lay claim that Lafitte’s shop was located on Bourbon Street!

Having lived in south Louisiana’s bayous for so long, Lafitte had also become an expert with the naval operations and common routes of port ships in the Mississippi River and its inlets. This would later be used to his great advantage.

The smuggling operations of the well-known privateer eventually came to a screeching halt, though, when the United States began enforcing the embargo in New Orleans city limits some time after the act passed. Forced to leave the city, Lafitte decided to set up shop on a small island in Barataria Bay, about 40 miles south of New Orleans, to continue his smuggling ways. Lafitte knew that his new business outfit was hidden well enough that U.S. officials wouldn’t be able to find him. With his business carrying on and continuing to grow, so did his wealth.

Tensions were high during this time between the United States and Great Britain, creating the War of 1812 and forcing the United States to be on edge about who they could and could not trust. Because of his track record and reputation, Jean Lafitte was still seen as a criminal in the eyes of the United States.

In 1814, the U.S. sent a naval force to invade Lafitte’s fleet and was mostly successful, seizing many of Lafitte’s comrades and ships. While his fleet took a hit, Lafitte himself managed to evade capture.

With the knowledge (or educated guess) of Lafitte being the best privateer around, United States officials granted him legal authority to pirate and capture British ships as a last-ditch effort to gain an advantage in the pivotal Battle of New Orleans—he did not disappoint.

Lafitte was later pardoned by General Andrew Jackson in praise of his efforts and accomplishments during the Battle of New Orleans. Jean Lafitte became labeled by some as a national hero.

The Origins of Lafitte’s Treasure

Throughout Lafitte’s times as a smuggler and privateer, he became very wealthy. His treasure consisted of the currency he would receive in exchange for his foreign goods as well as the fortunes left on the merchant ships that he captured.

It is still unclear why Lafitte had to bury his treasure or even where he was last seen. Some historians recount that Lafitte went back to a life of crime, leaving the United States no choice but to pursue his arrest. With the threat of imprisonment and the fear of being captured, Lafitte allegedly buried his treasure with the goal to once again evade U.S. seizure and to come back to it later.

The Ongoing Mystery of Lafitte’s Treasure

These questions are why the mystery is still such an interesting topic today—more than 200 years later!

The state of Louisiana is not exclusive to rumors of the treasure’s whereabouts too, as residents of Texas have claimed that the treasure was buried somewhere along the Texas Gulf Coast. There are many accounts that say Lafitte settled in Galveston after his adventures in Louisiana.

A family in Baytown, Texas tell their story as they believe they found one of Lafitte’s sunken ships. The family thinks this could be a clue as to where the actual treasure is.

There is even an event in La Porte, Texas centered around the treasure called the “Annual Search for Lafitte’s Gold.”

Switching gears back to Louisiana, this Jean Lafitte tale quotes a former student of Mount Carmel Academy in New Orleans stating that the treasure is buried near an oak tree on the school’s campus.

This article provides images of newspapers from 1921, and one column in particular that talks about Lafitte’s treasure. It reads that a cache of ancient gold coins was found near Jefferson island. It also mentions reports of larger sums of the treasure being buried in the appropriately-named small town of Lafitte, Louisiana.

One story even says that a swamp in the Natalbany River in Springfield, Louisiana, was drained because Lafitte’s treasure was thought to be underwater there. Much to the chagrin of the locals that helped drain the swamp, there was no trace of the treasure to speak of.

To this day, this mystery still has historians, researchers, and treasure hunters alike scrambling to find answers. Metal detector companies may be the only satisfied parties, as the Mystery of Jean Lafitte’s Unfound Treasure seems to be a voyage that will never end.

Do you have any leads as to where Lafitte’s treasure might be? Let us know in the comments below!

Yes in my backyard

Corey A. Ewing
Reply to  Rissy

Where’s your backyard? I have a metal detector

Nice little interesting overview but the bit “many accounts say lafitte settled in Galveston” casts unnecessary doubt, The settlement in Galveston (“Campeche”) is firmly established in the history, there’s even a museum there about it.

Yes I visited his home the Mason rouge in Campeche Galveston tx. I a month there. I was living in high island Texas .mostly driving the beach further east to sea rim. Found a mamouth tooth a a tiny brick made of shell it has letters P on it and the other I cant make out. Very old 3 x 3 nches by 2 inches. Small but made like a brick. I also. Found bones of mamouth and Indian tools. Lots of glass also. But the treasure is in my best belief to be in Galveston. Probably inside the hidden stairs that went to the first floor of his mason rouge. I studied it very well and found a hidden marking on a wall beside the stairs and a solid wall pit with a hole in the top. The stairs run beside it. You can see a small door that was covered. It’s in the concrete shell stairs. . But the gold and diamond jewl was the confirmation I needed. It was stuck in the crack of the stairs. But remember Lafitte’s black dogs are still around don’t go a hunting unless you are prepared to suffer the consequences. They will haunt you in your dreams for making a
wrong move on Lafitte’s mason rouge.

I may have found some of the treasure

I think y’all lying about the finding treasure

I know where the treasure is

Plum bayou look for trees cut down and fake grave at the end. And the ship berry bros found look for gold on land nearby. My grandfather’s mother lived next to his mother and we were told of the story’s on where some was at. My grandfather never got to look for the treasure s

I’ve heard he would sometimes slip into Mobile Bay. He could have stashed some treasure somewhere along the Eastern shore.

u all caping about finding his stuff

If you study your info you will be lost. He fled New Orleans to Lake Pontchartrain. The Indians in the Mandeville area helped him escape to the Pearl River. He had to take a pirogoe which is a wood boat that would have sank if all the treasure would have been on board. So, if you google Money Hill in Abita Springs ,La . You will see it gets its name from the treasure being buried there. It’s off 435 about 12 miles from where he fled imprisonment to the Pearl River. Look it up.

Is the image on this article what the actual chest looked like?

The Buccaneer's Nephew
Reply to  Robyn

There were no chests. The silver that Lafitte accumulated from selling captured slaves, cotton, and other goods was stored in wooden kegs or casks. Like a little wooden barrel.

What books would you recommend about this pirate?

It where he lived when he was a child

Are you looking for the treasure

Those looking for Gold, Diamonds, Jewelry etc won’t find it. The prizes that Lafitte took were slaves, cotton, commodities, etc. He sold those at his location “The Temple.” The money that he sold them for was Spanish Coin, Reales usually in 2,4,8 denominations, minted in Mexico. The ones found their range from the late 1770;s to 1814 or so. The treasure already found was Spanish Silver, not Gold. The Temple was located just North of what is today Little Lake, in Lafitte’s time it was Little Lake Barataria, where Bayou Perot and Bayou Rigolets meet. That was more of his commerce center, again where he exchanged merchandise for coin. It was also the location that US Forces attacked, causing his band to make a hasty retreat. Many from the area have taken artifacts from there, including coin. Most of the people were locals, from Lafourche Parish, the southern part, mainly Cut Off and Larose and the Gheens area, and also from the Des Allemands location. When you cross Bayou Des Allemands on Hwy 90, looking down the bayou to the south it’s a short ride to where the primary temple location was. My Grandpa told me often when I was very young that everyone thought that Lafitte’s “fort” was on Grand Isle, but it never was. He landed ships at Grand Terre and Cheniere, and then brought the merchandise to The Temple to be auctioned. I grew up back there, in those waterways, in that area and found many interesting things. I always heard that an area Boat Company Owner started his business with a 5 gallon bucket of silver taken from that area. I always wondered why the “searchers” were only local, and that an organized big search never happened but it never did. Most who plied that area back then kept what they found close to the vest, and today that area is all open water, though many locals can still point out to you exactly where the Temple was. I have no doubt that the “Historians” will decry what I’ve said here, and I’m cool with that, I know what I saw and found, and I know what others saw and found. Key to remember is that Lafitte was a business man, who turned merchandise that he acquired into money.

The Friend
Reply to  The Buccaneer's Nephew