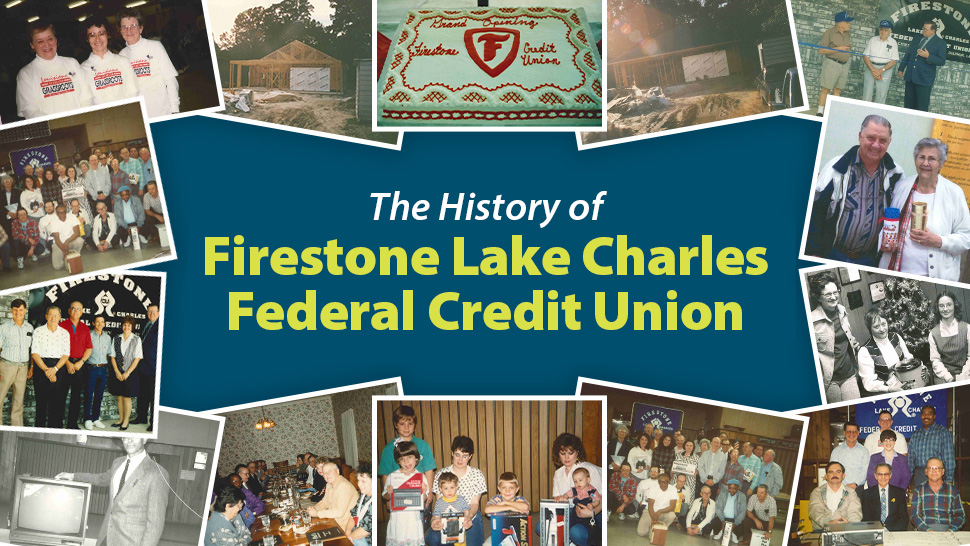 The history of Firestone Lake Charles Federal Credit Union is connected to Firestone Polymers, LLC, a synthetic rubber plant in Sulphur, Louisiana. The polymers plant played a little-known, but vital, role in the Allied Powers’ success during World War II.

The plant known as Firestone Polymers, LLC was established near Sulphur, Louisiana in 1943 to produce synthetic rubber in support of the national defense effort during World War II. Nearly every war machine as well as electrical wiring, tires on trucks, and jeeps required the use of rubber. Germany, Italy, and Japan controlled ninety percent of the world’s natural rubber by 1942. The Axis Powers’ hold on raw, natural rubber made it nearly impossible for the Allied Powers to acquire it.

Synthetic rubber was invented in 1879 by Gustave Bouchardat. Rubber remained expensive and difficult to make up until 1940 because research on it was sparse. The material was also significantly inferior to natural rubber. The need for good quality synthetic rubber was critical by the start of World War II. President Franklin D. Roosevelt responded by forming the Rubber Reserve Company (RRC) in 1940.

The need for natural rubber become even more drastic in 1942, in response, President Roosevelt formed the Rubber Survey Committee. The committee investigated and made recommendations to solve the rubber shortage. One of their recommendations was to build 51 plants to produce polymers and monomers to manufacture synthetic rubber. One of these plants was Firestone Polymers in Sulphur.

The committee also followed the RRC’s lead and recommended that the rubber companies and U.S. government agree to share the recipes to produce it.

The plant operated under the United States government until Firestone Tire and Rubber Company acquired it in 1955. Bridgestone Manufacturing Company bought Firestone out in 1988, and the Sulphur plant moved under its management.

Firestone Polymers has become a key contributor to the economy of the Lake Charles area throughout the years. The company produces over one million pounds of synthetic rubber each day. This rubber helps make tires, golf balls, and other rubber-based products. The company also continues to provide employment opportunities for hundreds of residents of the Lake Charles and Sulphur area.

The credit union officially opened on June 11, 1954, with 21 members and 19 membership applications. The maximum deposit allowed was $500, and the maximum loan allowed was only $100. Firestone started small, but it had 242 members by January 1955.

Although it was initially established for employees of the polymers plant, Firestone Lake Charles Federal Credit Union expanded to include other industrial plant workers in the 1980s. Eventually, they grew to serve more than plant workers. They added several Select Employee Groups from a wide range of industries, including the popular local restaurant Hollier’s Cajun Kitchen!

Pelican State Credit Union is excited and committed to the residents of the Lake Charles area. The credit union will continue to serve the members and the 22 business partners with the same enthusiasm that Firestone Lake Charles Federal Credit Union did!