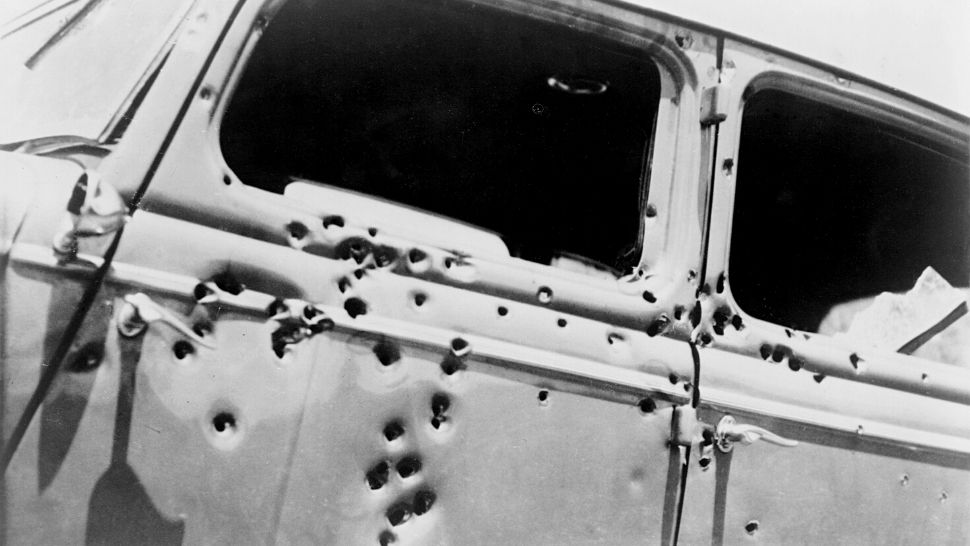 In downtown Gibsland, Louisiana, on 1st Street—right near City Hall—sits a small abandoned gas station. A concrete porte-cochère (which is a grand doorway to a building or courtyard) features three old gas pumps with long-gone prices. A small store area and garage stand silent in the background. A plaque pinpoints where a pay phone used to hang.

That plaque represents the Bonnie and Clyde gas station’s claim to fame—the phone call that former Texas Ranger Frank Hamer made to the man who’d hired him, Texas prison superintendent Colonel Lee Simmons. The date was May 23, 1934. The message: Clyde Barrow and Bonnie Parker were dead. It marked an ugly end to a two-year crime spree that fed the imagination of a public hungry for sensation.

The World of Bonnie and Clyde

The duo lived in difficult times. The Great Depression began with the stock market crash of 1929 and continued throughout most of the 1930s. The depression hit rural towns the worst. The economic crash left most Americans struggling. It also overlapped with the later years of Prohibition, and the violence that often accompanied its enforcement.

Robbery was such a prevalent problem that in 1927, the Texas Bankers’ Association issued a standing $5,000 bounty exclusively on dead bank robbers.

A number of violent criminals like Machine Gun Kelly and Baby Face Nelson had become famous, some even heroic.

Clyde Barrow and Bonnie Parker—referred to as Barrow and Parker in the day—quickly joined the ranks of dangerous criminals the FBI deemed “public enemy number one.”

While portrayed as a daring, romantically involved pair, beneath that publicized image, the two were determined, cold-blooded opportunists who brought chaos and misfortune to all who crossed their paths.

Bonnie Parker and Clyde Barrow Before They Met

Bonnie Parker was born in 1910 in Rowena, Texas, but grew up in Cement City, a poor Dallas suburb. She was academically bright, but troubled. Bonnie began seeing classmate Roy Thornton, tattooed his name on her thigh, and married him several days before her 16th birthday.

Thornton was physically abusive and a criminal. He landed in jail in 1929 for robbery, and Bonnie reportedly never saw him again.  However, she never divorced him and was still wearing her ring the day she died. Bonnie was 19 years old and working as a waitress when a mutual friend introduced her to Clyde Barrow in January of 1930.

Clyde Barrow was born in 1909 in Telico, Texas. When his family farm succumbed to drought, they family moved to Dallas. Clyde was musically inclined—playing both guitar and saxophone—but was also in and out of trouble. He dropped out of school at 16 and soon took to a life of petty thievery, car theft, and armed robbery.

The immediate bond between Bonnie and Clyde set the tone for the coming years.  The authorities arrested Clyde in Waco, Texas, for car thefts and burglaries in March 1930. Houston authorities began pressing a potential murder charge while he was awaiting trial. Clyde and two accomplices escaped after Bonnie smuggled in gun for them.

Clyde and his accomplices turned up in Middletown, Ohio, breaking into a dry-cleaning business. Law enforcement arrested and extradited the the gang back to Texas when they attempted to break into another business.

A judge sentenced Barrow to 14 years in Eastham Farm. He was paroled after serving two years due to overcrowding and his mother’s campaigning—but not before he’d axed his big toe and part of another to exempt himself from hard labor.

He returned to Bonnie in February of 1932 with a permanent limp and a burning hatred of Eastham prison.

Bonnie and Clyde didn’t operate alone. Debate still circulates as to whether they committed every crime attributed to them. A number of individuals regularly appeared in accounts of the Barrow Gang’s exploits and photos. The names include people like Ralph Fults, W.D. Jones (sometimes mistaken for Pretty Boy Floyd), Floyd and Raymond Hamilton, Joe Palmer, and Henry Methvin as well as Clyde’s brother Ivan (also known as “Buck”) and Buck’s wife, Blanche. Some suspect that Cumie Barrow (Clyde and Buck’s mother) participated in Clyde’s exploits.

According to FBI accounts of Bonnie and Clyde, “at the time they were killed in 1934, they were believed to have committed 13 murders and several robberies and burglaries.” Nine of those murder victims were law enforcement officers. What started as a way to acquire more money and seek revenge on corrupt prison guards grew dramatically out of proportion and cost the couple significantly over time.

The first half of 1932 following Clyde’s release saw a number of attempted robberies and events that demonstrate how easily things could go wrong.

When police arrived to investigate the bridge crash, Clyde and Jones took them hostage in the back of the police car, placed the injured Bonnie across them and drove everyone to Oklahoma. Once there, Clyde tied the policemen to a tree with barbed wire and headed to Arkansas with brother Buck and Blanche, Buck’s wife, as well as the injured Bonnie and W.D. Jones.

In Alma, Arkansas, in need of money, Buck Barrow and W.D. Jones robbed Brown Grocery. During the getaway, Buck rear-ended a car, drawing the attention of Marshal Vernon Humphrey. Buck shot Marshal Humphrey and fled with Jones in the lawman’s vehicle. Humphrey died the next morning, and the ensuing manhunt forced the Barrow Gang to flee.

January of 1934 delivered the watershed moment.

The Death of the Duo Near Gibsland, Louisiana

By the spring of 1934, desperation was setting in on both sides—criminals and law enforcement. Bonnie and Clyde wanted to visit family yet knew it was a dangerous proposition.

The Grapevine murders turned any lingering degree of public admiration into condemnation. What made things even worse was their subsequent murder of 63-year-old Constable William Campbell in Oklahoma.

Meanwhile, Frank Hamer was a methodical man known for getting things done right. The Barrow Gang had been reduced to Bonnie, Clyde, and Henry Methvin. He’d followed them as they robbed banks in Texas, Oklahoma and Iowa and had noticed a pattern that included Dallas, Missouri, and northwest Louisiana.

Methvin’s family lived in Louisiana and was due for a visit. When Hamer approached the local sheriff in Bienville Parish, he received an offer—Methvin would deliver Bonnie and Clyde in exchange for a pardon.

On the morning of May 23, Hamer and his men were waiting, hidden along the road to the Methvin family farm near Sailes. They commandeered Henry Methvin’s father’s truck and parked it at the side of the road with a wheel removed as bait. When Clyde approached in his car and saw the Methvin truck, he slowed. Hamer and his men opened fire. The car and its occupants took 167 rounds. Bonnie Parker and Clyde Barrow were dead.

Frank Hamer drove the eight miles back into Gibsland to use the pay phone at what became known as the Bonnie and Clyde gas station and let Colonel Simmons know that he’d fulfilled his commission.

Paying Homage to That Fateful Day

Today, the Bonnie and Clyde gas station still stands. A plaque holds the space where the pay phone used to hang. It’s just a few easy steps from the Bonnie & Clyde Ambush Museum, where the actual pay phone that Hamer used is displayed.

The museum occupies what was once Ma Canfield’s Café, where Bonnie and Clyde had gotten breakfast before heading to the Methvin farm. Interestingly, the Bonnie and Clyde gas station plaque promises, “The real story will live forever.”

With all of the varying accounts and conflicting evidence, what that real story is—we may never really know.

Have you heard the story of Bonnie and Clyde’s last stand in Gibsland? Let us know in the comments!