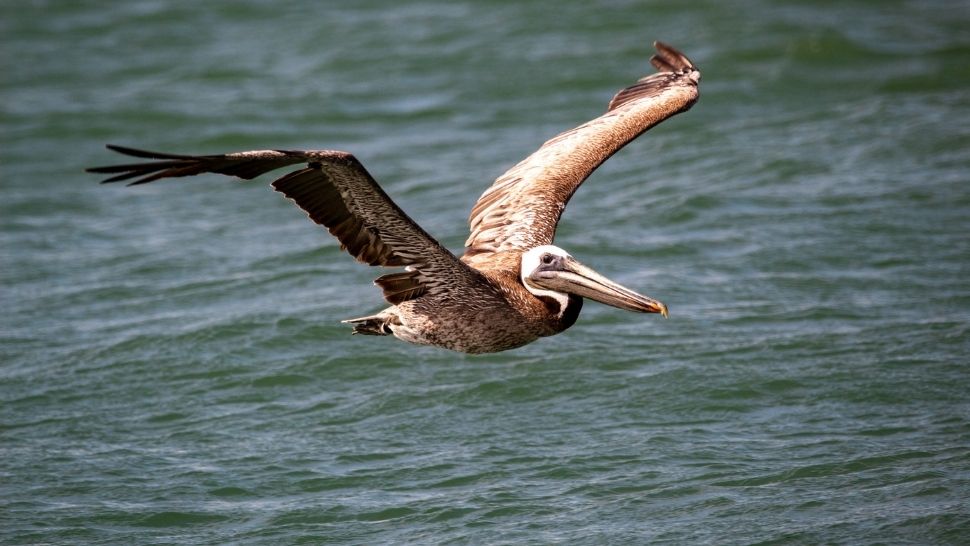 With over 7,700 miles of shoreline, it’s no surprise that a seabird was chosen as Louisiana’s state bird. We’ve celebrated the brown pelican as our state bird since July 27, 1966. Louisiana’s even known as the Pelican State.

Our brown pelicans are both majestic and distinctive, and Louisiana’s state bird is beloved by many for so many reasons.

Brown pelicans aren’t like any other bird—even other pelicans. Their silhouette against a marine sky is unmistakable.

A sweepingly muscular wingspan extends seven feet or more as they glide low across the water, angles as they soar, and folds as they dive into the sea for a choice catch. Brown pelicans are the only pelicans that crash dive to stun fish and scoop them up.

Almost prehistoric in appearance, a strong head and huge beak sit atop a slender neck. The pouched bill averages nine inches in length and can hold up to three gallons of water. This is three times what the pelican’s stomach can hold. The birds strain out seawater before swallowing their catch.

While brown pelicans can appear rather awkward on land, in flight, the head somehow gracefully tucks against a stocky body that becomes dynamic and strong. Just beneath the skin, a network of air sacs protects internal organs during those spectacular dives.

For their colonies, they prefer areas safe from land-based predators that can threaten eggs and chicks as well as adults that may be older, injured or otherwise vulnerable. Key threats are dogs, cats, raccoons, and reptiles. Groups of brown pelicans may be referred to as squadrons thanks to their orderly V or straight-line flight formations as well as pods, pouches, or scoops.

Brown pelicans live long lives and live in family-based groups. That big brown pelican that you see on the pier, the one that seems so worldly-wise, may be 30 years old—and part of an extensive, complex family. In fact, the oldest known pelican lived to be 43.

Chicks need eight to ten months to learn how to hunt and feed themselves. While they’re learning, both parents typically hunt and deliver about 150 pounds of regurgitated fish per chick. During this time, chicks are also highly social, yet parents easily recognize and tend to their own chicks.

The neck will turn white, and their head and face develop light yellow feathering. Reddish-brown patches form on the sides of the neck, and body feathers often darken to richer shades of grey and brown—even appearing bluish in breeding season. Their eyes may also change color, lightening to a paler shade of brown or even blue.

Breeding season starts in March and April with males devoting a full week to creating an enticing nest for a prospective mate. While some birds prefer trees or bushes, others will dig a scrape in the ground and line it with grasses, feathers, seaweed, sticks, and other debris.

Brown pelicans are serial monogamists. Once they choose a mate, they’ll raise their chicks together as exclusive partners who share parenting responsibilities. At the next breeding season, they may decide to do it again or choose a new partner for a new monogamous pairing.

Females lay a clutch of two or three eggs that take 28 to 30 days to hatch. Both brown pelicans in a pairing—mom and dad—will take turns incubating their eggs with their webbed feet. Chicks need 70 days to fledge.

A Population on the Brink

Brown pelicans were once on the endangered species list. When the Louisiana legislature choose the brown pelican as Louisiana’s state bird in 1966, its survival was uncertain.

In the early 20th century, brown pelican populations suffered due to the fashion industry’s demand for elaborate feathers until the Migratory Bird Treaty Act of 1918 protected migratory birds.

By the mid-to-late 1900s, environmental pollutants like DDT were decimating populations once more with nest failures due to thin eggshells. The United States Environmental Protection Agency (US EPA) federally listed the brown pelican as an endangered species in 1970. The United States banned the use of DDT in 1972.

Brown pelicans were transported from Florida and re-established along the Louisiana coast. The US EPA removed the population from the endangered species list in 1995.

Current threats remain human pollution—plastics mistakenly ingested as food, fishing lines and equipment that result in entanglements, and oil spills that cause feathers to absorb water and result in hypothermia and drownings. Meanwhile, researchers continue to monitor genetic diversity, structure, and health within brown pelican colonies as well as the quality and preservation of habitat.

Fit for the Values of Louisiana

The very nature of the pelican has made it a Louisiana favorite and tradition. The Louisiana state seal celebrates a white pelican mother tearing at her own breast in order to feed her three chicks in a nest. It’s a symbolic ideal from the Middle Ages that Catholic settlers brought to their new home. After all, pelicans are known for being good parents. The motif first appeared on Louisiana’s state seal as early as 1812.

Louisiana adopted the pelican motif flag in 1912, and updated it with a more modern and multicolored version in 2010. However, like the pelican on the seal, the pelicans on the flag appear as white pelicans.

In 1966, Louisiana adopted the brown pelican as its official state bird. This is significant in that the brown pelican is Louisiana’s native species of pelican. While white pelicans may overwinter in the Gulf, their breeding grounds are elsewhere.

Dating back to 1995, Louisiana’s official painting includes the pelican flag and its motif as well as a prominent brown pelican posing in the lower right quarter of the painting. The brown pelican was also one of three images featured on the U.S. Mint’s Louisiana quarters released in 2002. It’s even the namesake of our NBA pro basketball team—the Pelicans. A number of Louisiana business – including our very own Pelican State Credit Union – feature the state bird.

Louisiana’s state bird represents many of the qualities we value as humans— strength and longevity, loyalty, hard work, and commitment to nurture family and community.

They’re also values that we believe in at Pelican State Credit Union. If you’re ready for a better way to manage your family’s financial future, stop by your nearest branch, or explore our website to learn about all the benefits of joining Pelican State CU.

What’s your favorite fact about Louisiana’s state bird? Let us know in the comments!