“You cannot let him ride that bike in public,” said my husband Wes. Our 3-year-old son had hit a growth spurt and suddenly looked like a clown on his tiny red tricycle. After enduring a heavy guilt trip, I gave my blessing for Wes to take Parker to Academy Sports to buy a new bike at 8 pm (bedtime) the night before Pelican State Credit Union’s Free Kids Bike Race.

To my delight, they were back home and assembling the neon green “big boy bike” within 45 minutes. Parker put on his helmet and took the bike for a spin around the house. He did pretty well considering there was no air in the tires! I sighed with relief and thanked my husband for maintaining our family cool factor. God knows I shouldn’t be left in charge of it!

Parker jumped out of bed with excitement on the morning of the race. Like all 3-year-olds, he asked hundreds of questions about the event and then declared that he is the fastest bike rider in the world. We did our usual morning shuffle to get dressed and out of the house. We dropped off my daughter (10 mos.) with my mother-in-law and headed to Abundant Life Church in Denham Springs for 9 am.

As we approached the registration table, kids of all ages whizzed by us on their bikes to warm up for the race. There were several tents with assorted games, refreshments (They had free smoothies! Yes, please!) and entertainment beneath them. The fire and police departments were there too! 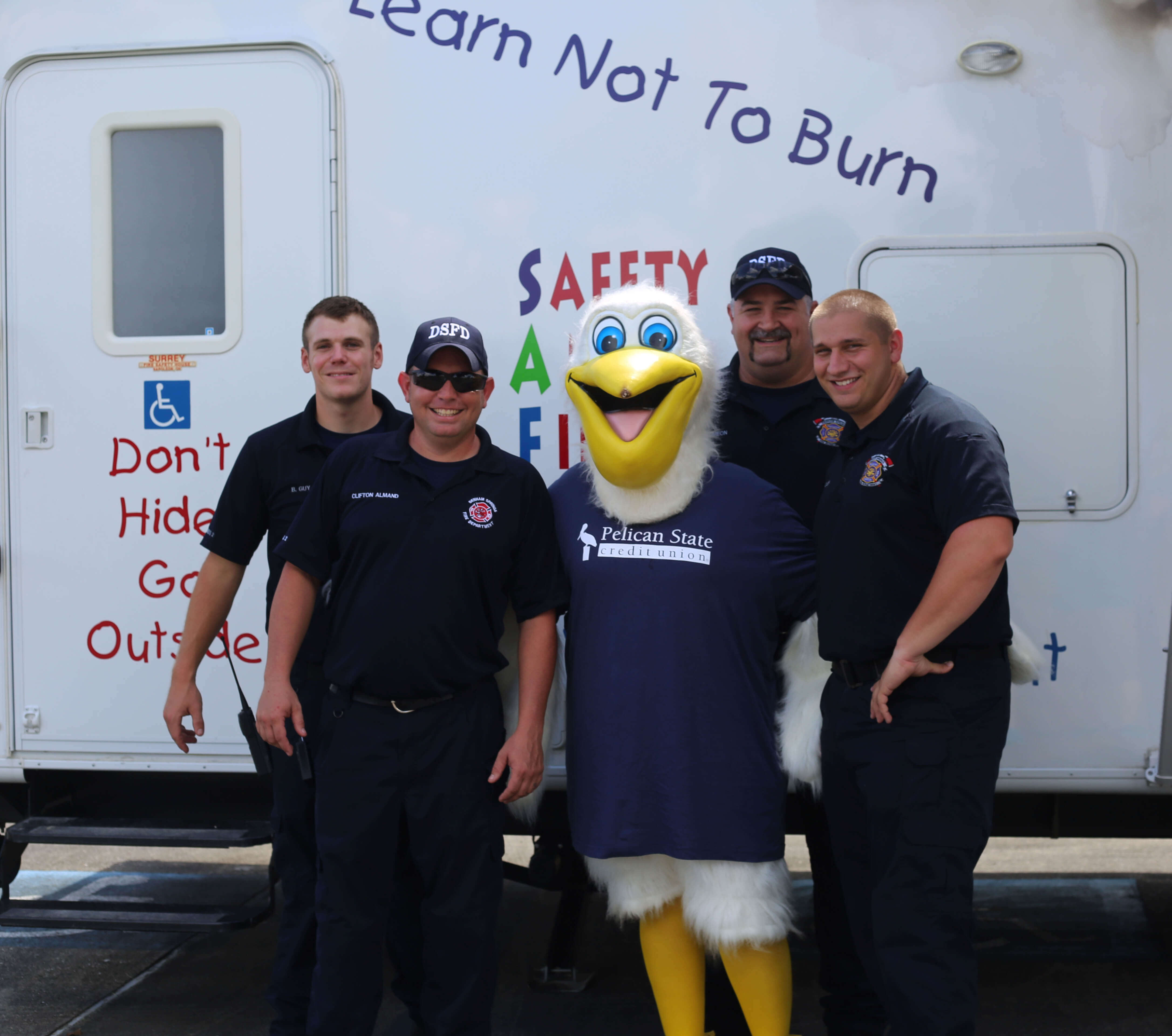 We checked in and received our swag bag full of goodies. Parker got a nice t-shirt, coloring book, crayons, crackers and coupons for free food! As a parent, I got a door prize ticket and the opportunity to win AWESOME prizes such as restaurant gift cards. Score! We wandered over to the refreshment tent to get our free smoothies and sports drinks.

We contemplated face painting for a hot second, but decided to forgo everything else and head straight to the bounce house where Parker stayed until race time. (I call them space walks. Apparently only Baton Rouge kids born in the 80s refer to bounce houses as “space walks,” but whatever.) To my surprise, Pelican had a few manual bike pumps available for me to inflate Parker’s tires while he continued to jump.

The Pelican staff led the kids in stretches while upbeat and kid friendly music blared through the speakers. After a quick helmet check, the races began! The 10-12 age group went first and made 5 laps around the “track.” After some door prizes were given out to parents, the 6-9 age group took off and made three laps around the track. Then came the main event – the 5 and under age group!

Not only was this group the largest in size, it was easy to see it was also a crowd favorite. There was magic in the air, a little like Christmas morning, as those cute tiny kids lined up and looked back at their parents to make sure they were watching. Parker was displaying a nervous excitement as he gripped the handle bars and waited for the race to begin.

The air horn blew, and the kids took off for one long lap around the track. Precious chaos ensued as some kids ran into each other and others called for their parents to give them a push. I followed Parker around the track because we strapped a Go Pro camera to his helmet, and I wanted to coach him through the race.

He was one of the last kids to complete the race, but he pedaled hard and I have to admit that I even got a little choked up when he crossed the finish line. He received his medal from Pelican’s Denham Springs Branch Manager after the race. He has since displayed that medal proudly on his dresser and wears it around the house from time to time. 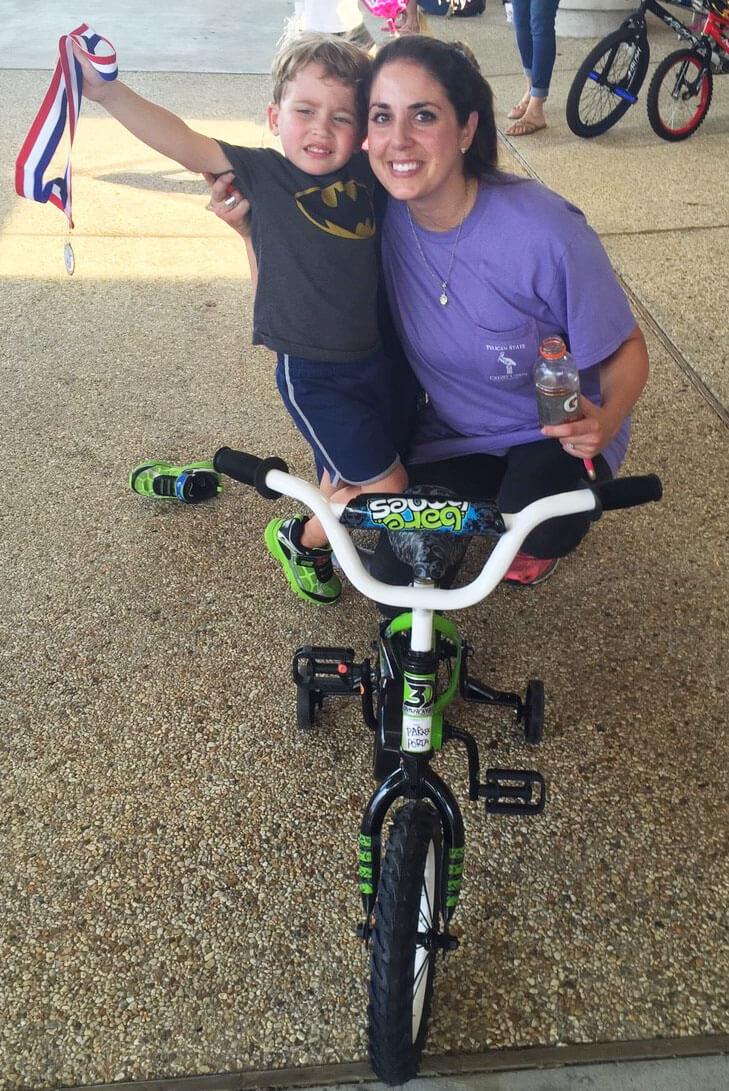 At the end of each bike race, a door prize ticket was chosen and its numbers read aloud. The lucky kid with the matching ticket won a very nice bicycle purchased by Pelican from Capitol Cyclery in Baton Rouge. The three bikes that were given away were top notch and not something you could just pick up from Academy Sports or Wal-Mart.

Despite the Louisiana heat on a Saturday morning, I would give this event an A+ for so many reasons. It was FREE, well organized and quick! It lasted under two hours, yet the memories will last a lifetime. Attending Pelican’s Free Kids Bike Race will definitely be a family tradition that we look forward to every year.

Mom-to-Mom – Here are just a few reasons you need to take your kids to Pelican’s Free Kids Bike Race:

Mommy of 2, workaholic, Britney lover and president of the Dunder Mifflin fan club. I love the Red Stick and I don’t believe in cloud storage.