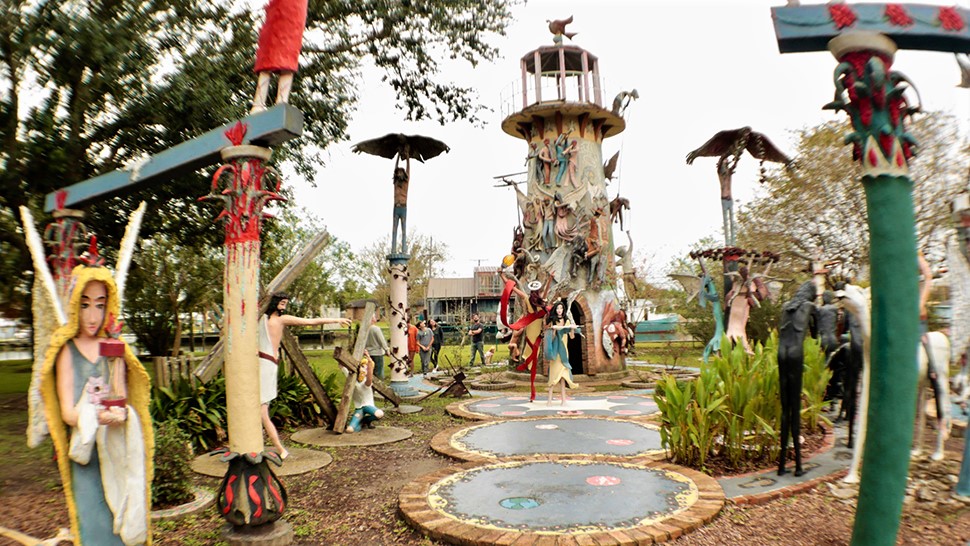 You know that saying, “Life is about the journey, not the destination”? That’s how I feel about road trips—literally!

I’ve always felt that the road trip is the best part about going on vacation (if it’s not a vacation you have to fly to, obviously). Vacations are usually well-planned out and consist of activities and sights that you want to experience, but you never know what you’re going to see on the side of the road.

We can all agree that Louisiana is among the most eccentric places in the world, and the same can be said about its roadside attractions. That’s why I wanted to list some of the most bizarre, quirky, and unusual spectacles you’ll encounter on Louisiana’s roadsides.

Here are 10 roadside attractions in Louisiana you’ll have to see to believe:

It may not be so easy on the eyes, or seem like much now, but this gas station’s historical significance makes it one of the most intriguing attractions on our list. In fact, it’s the site where the world found out about the deaths of notorious outlaws Bonnie and Clyde.

In 1934 and in the wake of a long time running from the law, the couple was confronted by police in Gibsland, Louisiana, engaged in an intense gunfight, and eventually met their fates.

Police Captain Frank Hamer was on the scene, and after confirming their deaths, he drove about eight miles into town to call his boss and make the announcement. The call heard ‘round the world was made at an outdoor payphone at this very gas station.

There’s even a plaque mounted near the garage door that says, “The real story will live forever!”

Located along Bayou Petit Caillou, the Chauvin Sculpture Garden offers a way to experience the bayou like you never have before.

The garden was originally created by artist Kenny Hill, and was later purchased by Nicholls State University. Today, the university often hosts events and shows as an off-campus extension of its art center.

Easily the most eye-catching piece of art in the garden is the lighthouse, which stands 45-feet tall and is composed of over 7,000 bricks! Throughout the garden, you’ll find more than 100 concrete sculptures of angels, cowboys, soldiers, birds, and more.

If you’re ever in the area, stop and check out the Chauvin Sculpture Garden—it’s truly a unique sight to see!

Right off the banks of the Mississippi River in Plaquemine, Louisiana, there sits a landmark that you literally can’t find anywhere else in the world.

Madonna Chapel gets is fame from its tiny stature, and has even been recognized by “Ripley’s Believe It or Not!” as the smallest church in the world. Its dimensions are nine feet by nine feet.

This church was built in 1903 by Italian farmer Anthony Gullo after he promised the Virgin Mary that he would build a chapel in her honor.

Although Madonna Chapel is over 100 years old, that doesn’t stop it from being an active Catholic church to this day! Mass is held once a year on August 15 and it’s open daily for anyone who wishes to visit.

Known as the “frog capital of the world,” frogs are exactly what you’ll see when passing through the charming and whimsical town of Rayne, Louisiana.

When you take the Rayne exit off I-10, the first things you’ll see are the colorful frog murals on the side of the overpass. If you’re lucky, you’ll get caught by the red light so you take a detailed look at them.

As you drive into town on the main road, you’ll notice more murals of frogs on the sides of buildings, as well as little frog statues placed throughout.

The most captivating sight in the entire town, though, is Monsieur Jacques. Monsieur Jacques is a tuxedo-wearing, giant metal frog statue, who tips his hat to Rayne’s visitors. The statue stands about 12 feet tall and sits next to the local police station and Rayne welcome sign.

Driving through Rayne is truly a fascinating experience, and one you won’t regret!

Swamp Daddy’s restaurant may have some of the best boiled crawfish, fried seafood, boudin, and cracklins around, but there’s something else that’s pretty cool about this restaurant.

Right out by the road on MacArthur Drive in Alexandria, Louisiana, the swamp daddy himself works all day greeting hungry customers and interested travelers alike.

The original crawfish sculpture had been in front of the restaurant for several years, then had to be removed in 2016 due to restaurant expansion. After some repairs, it made its return in 2018.

No neon sign necessary for Swamp Daddy’s restaurant—the giant crawfish sculpture is more than enough to entice customers to stop and visit!

This beautiful home was built in the 1830s and is a focal point along the Cane River in historic Natchitoches, Louisiana. It gets its fame more recently, though, from being the primary filming set of award-winning motion picture, Steel Magnolias.

After the movie was filmed, the house was eventually converted into a bed and breakfast. There’s a gift shop on the first floor, and some of the rooms are even set up exactly like they’re seen in the movie.

If you ever find yourself driving down Jefferson Street in Natchitoches, be sure to pull over and check out the house. There’s a sign out front that reads “Steel Magnolia,” so you can’t miss it!

Louisiana State University’s mascot, Mike the Tiger, is much more than a person in a costume that dances during sporting events. In fact, he’s a real-life Bengal tiger, and the only living tiger on a college campus in the United States!

The $3.7 million environment first opened in 2005, then was renovated more recently in 2017. It includes a freshwater pond and waterfall, rock walls, a large oak tree for overhanging shade, and various native vegetation. Its advanced physical and technological features, as well as its 15,000-square foot size, make it one of the finest tiger habitats in the country.

It’s located near the corner of Nicholson Drive and North Stadium Drive in Baton Rouge, right between Tiger Stadium and the Pete Maravich Assembly Center.

Stop by the habitat today and you may just see Mike in all of his striped glory!

This 19-foot-tall giant Dalmatian is located in downtown Shreveport and is said to be the guardian of the arts in Northwest Louisiana. If you get close enough, you’ll see that the tag on its collar reads “Art.”

The idea behind “Art the Dalmatian” came from two Academy Award-winning artists who presented the sculpture as a commemorative housewarming gift to the Shreveport Regional Arts Council. Since then, the old Central Fire Station (next to where the sculpture sits) has been repurposed and is now called the Central ARTSTATION.

This sculpture is best visited at night, as the Dalmatian is covered in over 250 glowing spots! Sometimes, the spots will blink and change colors, and they even change to green and red during Christmastime.

When it was first built in 2014, there was even a way you could buy a spot on the Dalmatian to memorialize a relative, friend, or pet. The cost? $101.

This 50-foot wooden alligator in LaPlace, Louisiana, is named “Saint” and sits on the front lawn of the city’s visitor center to greet travelers.

On Christmas Eve every year, residents of LaPlace gather along the Mississippi River levee to watch bonfires and enjoy the night. The bonfires are celebrated to guide the way for “Papa Noel,” which is the common name for Santa Claus in French-speaking areas.

Saint is the mascot for the event, and was originally unveiled to commemorate this special tradition.

Stop by and check out this special roadside attraction if you’re ever in the LaPlace area—don’t worry, Saint doesn’t bite!

Of all the fascinating roadside attractions on our list, this one may be the most unusual.

Built in 1981 by Simon Villemarette, this castle sits along the waters of Irish Bayou in New Orleans. It has two bedrooms and one and a half bathrooms. The castle sits on private property, but even from a distance, you’ll notice its beautiful medieval architecture.

The reason that the castle is unusual is because nobody really knows what its purpose is. It doesn’t appear that anyone lives there, although some locals say that it’s used as a bed and breakfast. The castle has also, and almost inexplicably, withstood catastrophic hurricanes like Katrina and Isaac without major damage.

If you’re ever in New Orleans near Irish Bayou, definitely stop and check out Fisherman’s Castle. There are “no trespassing” signs out front, but there’s a good and safe spot to pull over and check it out from a distance.

Have you been to any of these roadside attractions? Let us know in the comments below, or share any additional attractions that we may have missed!

My favorite movie is Steel Magnolias. It sure would be fun to stay in that beautiful home. A road trip all around Louisiana should be on every ones bucket list.