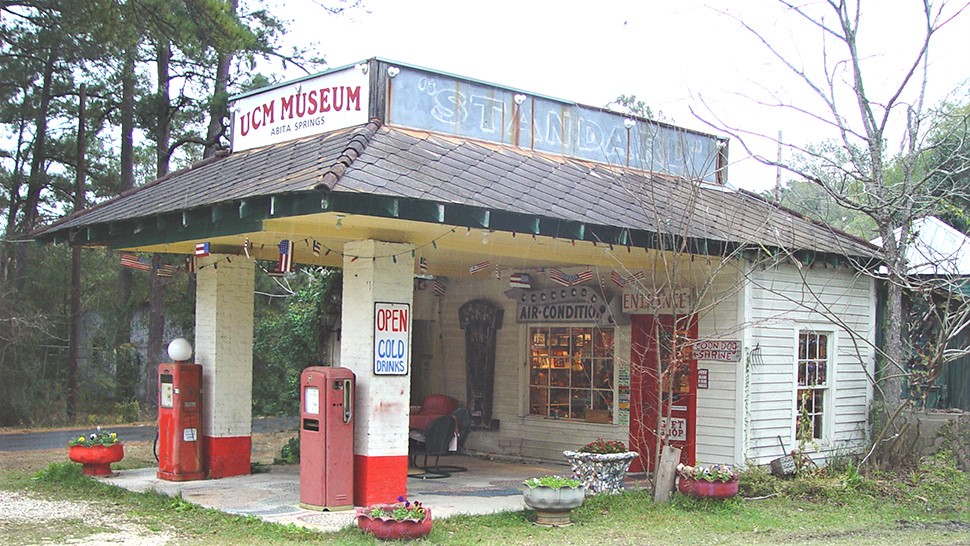 There are over 220 museums in Louisiana. No matter which corner of the Pelican State you travel to, you’re sure to find a museum that showcases fascinating artifacts or moments in history that shaped our great state into what it is today.

Calling all history buffs and fun seekers alike, because I’ve narrowed down Louisiana’s lengthy catalog of museums into a list of ones you won’t regret visiting. Each museum you’ll see on this list features its own unique experience that sets it apart from other museums.

Take a road trip around the state with us.

Here are the 10 museums in Louisiana that you absolutely have to visit:

The first thing you’ll see when driving up to the Abita Mystery House is an old, vintage gas station, which is the entrance to the museum. As you walk through the gift shop, there are displays of art, memorabilia, old arcade machines, and thousands of bottle caps throughout.

Some of the most popular exhibits are the old arcade machines, “Darryl the Dogigator” (half dog, half alligator), and even the crash site of a UFO!

The Abita Mystery House is truly one-of-a-kind, and something you should experience at least once.

“Cheers!” That’s what you’ll be shouting when you visit the Sazerac House in New Orleans.

The Sazerac brand name dates all the way back to the 1600s. It was initially a type of cognac, later evolving into the rye whiskey that it’s known as today. The Sazerac cocktail was made famous in New Orleans, but it is now served all over the world, giving people a taste of Louisiana history no matter where they are.

Located at the corner of Canal and Magazine Street, the Sazerac House boasts guided distillery tours, a full-service bar, interactive cocktail exhibits, and much more.

When you visit the Sazerac House, you’ll get an exclusive look into the cutting-edge technology and experience everything that goes into crafting the famous spirit. It’s touted as an “immersive exploration of the spirited culture of New Orleans,” making this charming attraction a must when you’re in the Big Easy.

Step into Vermilionville and go back in time!

Located in Lafayette on the banks of Bayou Vermilion, Vermilionville is a living history museum that highlights the history and culture of Native Americans, African Americans, Acadians, and Creoles that lived in Louisiana over the centuries.

You’ll find an array of historical artifacts, original homes, tools, appliances, boats, and much more as you walk through the 23-acre village.

In addition to being a museum, Vermilionville also has a full-service restaurant that serves Cajun and Creole food, and it even serves as a wedding venue!

Founded in 1959 and opening its doors in 1962, the LSU Museum of Art takes you on a journey of many different artifacts such as American and European paintings, sculptures, decorative arts, and much more!

Being the only art museum in Baton Rouge, this museum has a lot of history that covers its 13,000 square foot building. In 2016, the museum also put a lot of effort into diving into the art and culture of Louisiana filling the museum with art installation.

Whether you’re a tourist or a local, the LSU Museum of Art is a great place to learn and examine the history of Baton Rouge and all of the unique ideas it has produced!

Located in Lake Charles and home of the second largest Mardi Gras celebration in Louisiana, the Mardi Gras Museum of Imperial Calcasieu offers an experience unlike any other.

The museum opened in 1998 and encompasses six rooms, each one featuring different things. The first room explains how Mardi Gras was originated, the second room is the Captain’s Den, and the third room is dedicated to costume design. As you navigate further throughout the museum, you’ll find the fourth room which gives the history of king cakes, the fifth room which displays ballroom costumes, and a sixth and final room consisting of a parade float that everyone can climb aboard!

The museum houses the largest collection of costumes in the world, and is the central place where Mardi Gras traditions, history, and artifacts are on full display.

Want to learn all about Mardi Gras and its rich history? This is the place to go!

Check out our list of 19 real haunted places in Louisiana that are sure to scare you!

Going back to 1907 and starting out as a public Library, the Louisiana History Museum in Alexandria has been a part of the downtown area for over a century. The museum is committed to “preserving the past, for Alexandria’s future.”

In the 1970s, Angelique Stafford “Gic” Kraushaar wanted to establish a museum in the city that would not just focus on Louisiana as a whole, but represent the history of Central Louisiana. This historic landmark holds the largest collection of Central Louisiana vintage postcards.

Along with thousands of historic photographs dating back to the 1860s, the museum documents Louisiana’s people, government buildings, bridges, military, and more!

This museum in Monroe, Louisiana, puts you right in the cockpit of history! The Chennault Aviation and Military Museum honors the men and women who served our country through the decades.

Possibly the most popular attraction in the museum takes you back and tells the story of General Claire Chennault and the Flying Tigers during World War ll. The museum is also housed in the last remaining classroom of the Selman Field Navigation School, which at the time, was the largest navigation school in the Unites States during WWII.

In addition to war heroes, you can also learn about the story of how a small crop-dusting business evolved in the second largest airline in the world today, which we know as Delta Airlines.

With so many stories and over 11,000 artifacts, the Chennault Aviation and Military Museum gives great insight to what flying an aircraft was like so long ago.

This wonderful museum was created to help preserve and tell the stories of the Orphan Train riders from the New York Foundling Hospital to Louisiana from the years 1873 through 1929.

Located in Opelousas, the site was one of the many stops for thousands of abandoned and homeless children who were rescued in the streets of New York seeking a new home and life. The Orphan Train Movement helped bring over 2,000 children to Louisiana to begin a new journey.

The museum continues to collect artifacts and stories for those who were there and create an interesting and informative adventure for its visitors.

The ICONS Museum is one of the newest museums on our list.

Established in 2019, the ICONS Museum in Covington, Louisiana, displays over 60 portraits of creative and impactful individuals in the modern era. You’ll find paintings of iconic figures such as Audrey Hepburn, Jimi Hendrix, Freddie Mercury, and Frida Kahlo, to name a few.

The museum also has RetroRooms which allow visitors to go back in time and experience past decade’s most iconic pop culture moments. You’re sure to feel all of the nostalgia in these rooms!

What sets this museum apart from so many others is that every aspect of the museum was entirely created by a single artist. Louisiana painter Matthew Montero founded the ICONS Museum and not only painted every portrait that’s featured, but also meticulously designed the museum based on his vision and how he wanted visitors to experience it.

Through hundreds of retro items, pristine portraits, and fine sculptures, this museum puts you in a world of imagination showcasing some of the people who helped shape the world as we know it.

This museum is a historic landmark that started as a jail, courthouse, and marshal’s office. Visitors can even go into the jail cells and get locked in to really get the full effect of what life was like in a cell back in the 1960s.

Along with jail cells, there are many artifacts such as photographs, a Super 8 video camera with a projectors, phonographs that play wax spheres, and more!

There’s even a second floor to this museum, which served as the mayor’s office years before, and now a home to the Slidell Mardi Gras Museum. That’s right—two museums in one!

At the Slidell Museum, you’ll able to learn all about the city of Slidell and how the town grew to where it is today.

Have you been to any of these museums? What was it like? Let us know in the comments below!

Just a nerd who enjoys the simple things. Grilling and watching sports are my hobbies. Dad joke enthusiast and General Manager of a fantasy football team.

Where is the Bonnie and Clyde Ambush museum!! It is an Awesome museum and a big part of Louisiana History!!!

Thank you for your comment, Perry! The Bonnie and Clyde Ambush Museum is definitely an interesting attraction, and could be featured in an upcoming blog post. Stay tuned!