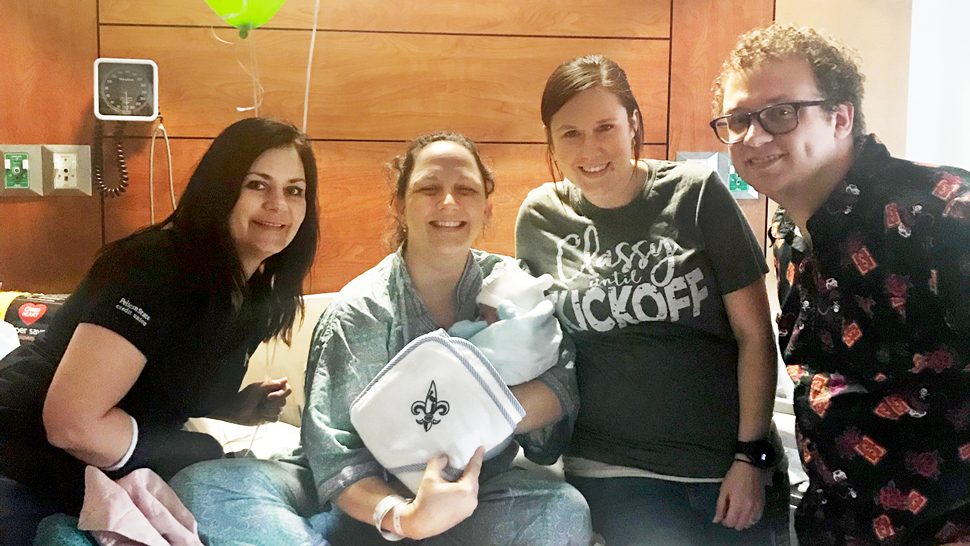 It’s no secret that Pelican loves to go above and beyond for its members! Frances Melanson, a member of Pelican and nearby resident of our Prairieville Branch, shares all of the wonderful experiences she has had during her time as a Pelican member.

How long have you been a member with Pelican?

Not long enough! There’s never enough time! But a little over two years, I believe.

How did you first hear about Pelican?

A friend of mine, Shanelle, who had been a member with Pelican for quite some time, recommended that I join! We frequently have to send money to each other, and she said I could easily transfer money to her without physically having to go to the branch.

What has been one of your favorite moments being a member with Pelican?

There are so many great moments! One moment that I really enjoyed was getting to meet Frank, the Marketing Supervisor at Pelican! The moment that was most special to me, though, was when Erin, Johnette, and Frank came to the hospital when I had my youngest child, Gunner. Erin is currently the Supervisor of MyBranch Lending, and Johnette, who was then the Branch Manager at our Prairieville branch and now serves as Pelican’s Risk Manager.

I felt so incredibly special and valued as a member because it truly made me feel like I am part of the family. I love all the people I have met that work at Pelican.

Have you been to any community events hosted by Pelican?

I attended the After School Snack event at the Prairieville Branch. The kids had so much fun that they beg to come with me now when I go to the branch!

Who are your favorite team members at Pelican?

All of them! Erin Mistric, Frank Kerner, Johnette Mauldin, and everyone at the Prairieville Branch!

We also got the chance to talk to Johnette and Erin, the team members that helped Frances become a member with Pelican. We asked them a few questions and gained a little insight on how Pelican acquired such an awesome member!

When did you first meet Frances?

I met Frances about six years ago through a mutual friend of ours. It was right about the time I started working at Pelican.

What kind of experiences have you both shared at Pelican?

I was talking to both Shanelle and Frances one day about Pelican and how they should switch over from their previous credit union to us. Initially, they were both hesitant and comfortable with where they had been banking. I eventually got Shanelle to switch over, and then Frances not long afterward. The main selling points were how amazing the girls are in Prairieville and how close the branch was to where they both worked.

When Frances finally decided to make the switch, she expressed that she could not have been happier with her decision. She loved everyone at the branch, especially Johnette.

I would get texts from Frances almost every time she visited the branch reiterating to me how much she loved Pelican. I would always advise her to share her experiences on Facebook so others would know how awesome Pelican and the Prairieville branch was.

Frances and I have held many conversations at the Prairieville branch. I have helped her at the teller line, and we both attended the After School event in May 2019. She even texted me “Happy Mother’s Day” this year!

Frances is a sweet, genuine person with a big heart. She is down-to-earth and so easy to talk to. When Frank and I had the chance to bring a gift to her for her baby, it was amazing to me because she was so appreciative, even though we felt it was the least we could do.

Frances loves to brag about her experiences with Pelican. Knowing that someone loves Pelican and the service you provide to them makes your heart warm.

It is always an enjoyable time when you are around Frances, but one of my most favorite moments was when she found out that Johnette had moved to our Corporate Headquarters and that the Prairieville branch would be getting a new manager. Frances added that Johnette’s replacement had some big shoes to fill, but texted me about two months later raving about how amazing Rachel, the new Branch Manager, was.

She also told me that Frank had kept in touch with her about the position being filled. She felt so special that he took the time to inform her of what was going on at the Prairieville branch. Knowing that he did not have to do that for her, Frances realized yet again how happy she was to have made the switch to Pelican.

It made me feel proud to work at Pelican with these amazing team members knowing they cared for her as I do.

One time, Frances had a beach vacation planned for her birthday, and we sent her a gift in hopes that she would receive it before leaving. The day the gift finally arrived, it was too late, and she was already on her way to the beach. Frances’ mother, who was there housesitting while she way away, called her to let her know that a package had come in the mail for her.

Frances turned the car around and went home to get it! She had her gift in time for her trip after all.

Frances and I both love telling this story to this day!